In Mexico, as in the rest of the world, social networks proved to be a key tool to maintaining social exchange amid the coronavirus pandemic. Throughout 2020, the more than 80 million social media users in the North American country generated as many as 15.4 million posts and 6.7 billion interactions across Facebook, Twitter, Instagram, and YouTube. Such heavy use has earned Mexicans second place in social media engagement in Latin America, nipping at the heels of number one Brazil.

Over the last 15 years, a vast number of platforms for sharing ideas and content have flooded the market. Yet, in Mexico, none has come even close to Facebook. In 2020, more than 60 percent of the nation’s population was on Facebook, a figure expected to increase by another eight percentage points by 2025. Mark Zuckerberg’s social network may not have a throne or a queen, but it surely remains the social media king among Mexicans. On top of its strong reach, Facebook's dominance in the territory is evidenced by an unmatched volume of visits, accounting for nearly half of all social media traffic on desktops, and over eight out of ten visits to social networks via mobile in 2020.

TikTok: the new app on the block

Launched in 2017, Chinese video-sharing app TikTok has seen its audience multiply over a short period of time. In Mexico, the number of TikTokers was estimated to surpass five million in 2020, a 23 percent increase over the previous year. The ease of creating short videos from the convenience of a smartphone, along with the sheer diversity of offered content are just some of the many features contributing to the platform's recent success, particularly among younger audiences. Whether or not it will be able to retain its ageing users or entice new segments of the population in the same way that Facebook has, however, remains to be seen. As current forecasts suggest, TikTok's golden days may be nearing an end, as a period of stagnation awaits in the upcoming years.
This text provides general information. Statista assumes no liability for the information given being complete or correct. Due to varying update cycles, statistics can display more up-to-date data than referenced in the text.

Social networks with the most reach
WhatsApp 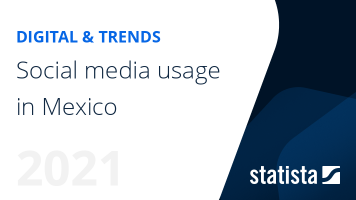 The most important key figures provide you with a compact summary of the topic of "Social media usage in Mexico" and take you straight to the corresponding statistics.