With the biggest population and online audience in Latin America, Brazil is the fifth-largest social media market in the world and by far the biggest in the continent. With more than two-thirds of its population having access to social media platforms, social networking audiences are expected to grow from 165 million users in 2022 to more than 188 million by 2027. Brazil is an attractive market for digital platforms despite the complexity of its current social and political scenarios and the growth of competition within the sector.

How do Brazilians use social platforms?

Even though access to social media in Brazil is projected to increase over the next years, the country does not reach the top positions regarding penetration rate in the continent, ranking behind neighbors like Argentina, Peru, and other nations in the Caribbean. Still, social media enjoys huge popularity among Brazilians: more than 84 percent of its population uses such platforms daily, with access rates among adults of around 92 percent.

Instant messengers are the most popular type of social media platform in Brazil, followed by content-sharing networks like YouTube, Snapchat, and Pinterest, and finally networks like Facebook. But the popularity of these platforms in Brazil does not bring only positive prospects, with blatant problems between social media and politics in Brazil being one of them, intensified by a polarized atmosphere and spread of fake news.

Challenges in every front

Meanwhile, Facebook is the most visited platform in Brazil. But the growth of mobile-first social platforms like TikTok, the diversification of the Brazilian messaging apps’ market with the likes of Telegram and Signal, and the presence of YouTube and Pinterest already pose challenges to the conglomerate’s decreasing dominance.

Despite the problems in the political sphere, the size of its social media advertising market is a land of opportunities for influencer marketing in Brazil. With more than 1.4 billion Brazilian reals invested in social media advertising in 2021, the investment in this market pays off, as social influence strategies remain effective to more than half of its Brazilian audience.

And again, Meta still reigns: Instagram is the most popular platform among influencers in Brazil, followed by Facebook. YouTube and TikTok followed with an equal usage rate by these content creators, as the ByteDance-owned company continues its expansion in the country and throughout Latin America.
This text provides general information. Statista assumes no liability for the information given being complete or correct. Due to varying update cycles, statistics can display more up-to-date data than referenced in the text.

Tiago Bianchi
Research expert covering internet & gaming in Latin America and Spain
Get in touch with us now
Published by Tiago Bianchi, Nov 22, 2022 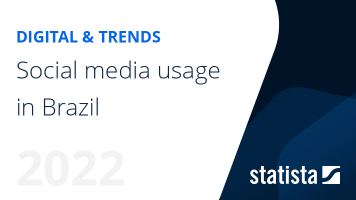 The most important key figures provide you with a compact summary of the topic of "Social media usage in Brazil" and take you straight to the corresponding statistics.