Published by
Raynor de Best,
Nov 17, 2020
After a decade of preparations, the euro currency was first introduced on January 1, 1999, acting as an invisible currency, since it was only used for accounting and electronic payments for the first three years. On January 1, 2002, the largest changeover of cash to ever take place was completed, where 12 countries in the European Union launched euro coins and banknotes. Currently, the euro is the official currency of 19 of the 27 members of the European Union, constituting the Eurozone or euro area. Overall, the majority of countries using the euro as currency believe that it is a good thing for the EU.
Since it's initiation, the total value of all currency in circulation has increased annually across the euro area. Per capita, the value of euro currency in circulation amounted to over three thousand euros in 2018. In terms of overall value, the 50 euro note accounted for a far higher share than any other denomination. In coin form, the 2 euro coin made up the majority value of total coins in circulation. The volume of euro bank notes circulating has tripled between 2002 and 2020, with the most numerous note being the fifty euro banknote.

One issue with physical currency other than the possibility of tearing or destruction of notes and coins is the threat of counterfeit production. During 2019, almost 560 thousand counterfeit notes were withdrawn from circulation. The most frequent notes found to be counterfeit in the euro area are the 50 and 20 euro notes.

In the following 5 chapters, you will quickly find the 36 most important statistics relating to "The Euro currency".

The most important key figures provide you with a compact summary of the topic of "The Euro currency" and take you straight to the corresponding statistics.

Perception of the euro

Bitcoin and digital currency in Europe

ATMs and POS in Europe 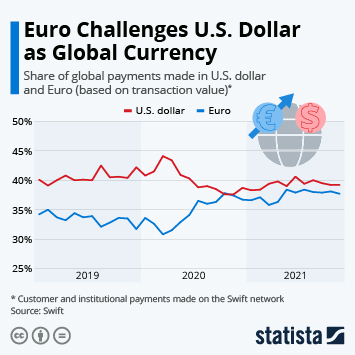