Blogs in form of videos, or vlogs, made their first appearance at the beginning of the 2000s, spreading through the internet at a rapid rate in the following years. With the subsequent introduction of social media platforms and the popularization of YouTube, user-generated videos have evolved into a wide range of different sub-categories. As of August 2020, global users were spending four hours per week watching user-generated content, and an additional 1.9 hours per week watching live stream gaming.
From live streaming to short videos and product reviews, online video has acquired particular importance among content creators, proving to be one of the most suited formats to attract users, increase engagement, and gain brand deals. As of 2022, even traditionally text-based social platforms like Twitter and Reddit have started to embrace the format, allowing users to create and post video content.

From affiliate marketing to selling merchandise, creators on YouTube are the proof that video sharing can morph into a recognized professional opportunity for many. Parts of YouTube advertising revenues go to the video creators, and with YouTube being the social media platform with the second-highest CPM (cost-per-mille) a high number of views does often translates into earnings for creators. Additionally, YouTube monetization features include ways for users to support their favorite creators directly, like channel membership, super chat, and buying merchandise.

In 2020, it was estimated that YouTube facilitated or supported the creation of 394 thousand jobs in the United States and 142 thousand jobs in the European Union, contributing to the regions’ GDP by 20.5 billion U.S. dollars and 2.38 billion euros, respectively. According to a survey of YouTube content creators in the United States, 60 percent of respondents reported that the platform gives them both creative and earning opportunities they would not get from traditional media. In Europe, more than seven in 10 creative entrepreneurs on the platform reported that YouTube gives them the possibility to work in a way that suits their needs.

Launched in 2017 as the international version of popular Chinese platform Douyin, TikTok has quickly risen to popularity worldwide. As of August 2021, the majority of content creators on TikTok were aged between 18 and 25 years old, a factor that contributes to the platform being popular among Millennial and Gen Z users.

In 2021, the platform launched the Creator Fund, which implements a payout system based on video views and other engagement metrics. The program is open to creators that have over 10 thousand followers and that have reached at least 100 thousand views in the previous 30 days. As TikTok does not share ad revenues with creators, the program received mixed reviews.

Founded in 2016, OnlyFans has become a well-known name for content creators. The platform, which is mainly known for hosting adult-themed content, counted approximately one million creators in 2020. Creators can choose to monetize photos and videos via monthly subscriptions, but also by engaging with fans via direct messaging and custom content requests. In January 2022, the OnlyFans website counted over 39 million visits from users worldwide, up by 37 percent compared to August 2021.

The NFT craze that permeated various social media platforms in 2021 might soon extend its reach to video content. In its yearly outlook for 2022, YouTube announced it was considering adding tools for NFTs features to help creators capitalize on their existing content. Industry sources have been quick to notice that the platform could be a potential non-fungible tokens powerhouse. In 2021, several iconic YouTube videos and well-known memes that originated on the platform have been sold as NFTs to collectors: “Charlie Bit my Finger” sold for approximately 760 thousand U.S. dollars, while the video meme “Nyan Cat” sold for around 600 thousand U.S. dollars.

Financial opportunities around video content have been expanding beyond the direct capitalization of influencers’ presence, including the development of a financing industry tailor-made for high-profile creators. Companies like the Los Angeles-based Spotter and the New York-based Jellysmack have been providing creators with upfront payments to license their social media video libraries while securing rights over their ad revenues. YouTube, which saw its advertising revenues reach almost 29 billion U.S. dollars in 2021, has been at the center of video catalog investments.

With the global COVID-19 pandemic raging, actors and personalities in the mainstream entertainment world turned to video content to keep an open channel with their fans and make up for lost revenues. In 2020, Chicago-based Cameo facilitated 30 thousand hours of paid personalized video content requested by fans to celebrities. Launched in 2016, the Cameo platform allows users to request personalized video content and live calls from their favorite TV star or musician for a fee. In March 2021, the platform obtained unicorn status after raising 100 million U.S. dollars in Series C funding.

Cameo hosts celebrities like Carson Kressley from the popular series "Queer Eye," and "Buffy the Vampire Slayer" actor James Marsters. The platform attracts fans looking for special birthday gifts and pep talks, as well as enterprises looking for a celebrity for hire. In 2021, actor Brian Baumgartner, who is well known for his role in the popular sitcom “The Office” as Kevin, was the most booked celebrity on Cameo.
This text provides general information. Statista assumes no liability for the information given being complete or correct. Due to varying update cycles, statistics can display more up-to-date data than referenced in the text.
Published by L. Ceci, Apr 8, 2022 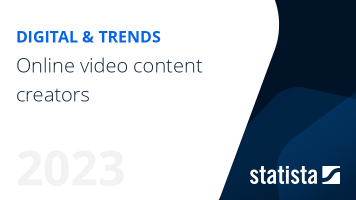 The most important key figures provide you with a compact summary of the topic of "Online video content creators" and take you straight to the corresponding statistics.