TikTok is a video-sharing app owned by Beijing-based tech giant ByteDance. Initially launched for the Chinese market under the name Douyin in 2016, the app’s international equivalent quickly became a global sensation, amassing millions of users every year. Previously considered a short-lived teen phenomenon, TikTok maintained its position among the most popular social media platforms in 2022. And even though it still ranks behind Facebook and Instagram in terms of popularity, Tiktok’s meteoric rise continues unabated. With a whopping 215 percent growth rate in brand value, TikTok firmly stands among the most valuable media entertainment brands worldwide. This leaves no doubt that the app, has become an immensely profitable business model. Besides young internet users catching on to the hype, marketers are also dedicating more time and dollars towards the app than ever.

How are marketers using TikTok?

Brands and businesses are increasingly embracing the vast potential of TikTok as a marketing tool. While the short-video-sharing app can still not compare with Facebook, Instagram, and other leading social media platforms used by marketers, a recent survey found that over 43 percent of industry professionals planned to increase their usage of TikTok for promotional campaigns in the upcoming 12 months. Apart from promoting their products and services via influencers, companies can also create their own profiles, upload videos, and start creative challenges to feature on TikTok’s For You page and potentially be seen by millions of users worldwide. One brand that has successfully harnessed the power of TikTok is Netflix. With close to 23 million followers, the VoD giant ranks second among the most popular brands on TikTok globally.

Influencer endorsement has proven to be an immensely effective form of social media marketing on pioneer platforms such as Instagram. This success has translated to TikTok and the new generation of entertainment apps, as more brands now cooperate with TikTok stars than ever. What makes these collaborations so appealing is not only the massive audience reach of TikTok mega-influencers like Bella Poarch but also the impressive engagement rates that influencer content can boast on the platform – especially among Gen Z users. By partnering with popular creators, brands can keep their fingers on the pulse and resonate with young audience, something many companies have struggled with in the past. So who are the most sought-after influencers on TikTok? As of September 2022, Khaby Lame was the most-followed person on TikTok. Seeing that sponsored posts by these creators can cost thousands of dollars, small businesses tend to work with nano- and micro-influencers who have fewer followers but can cater to more niche audiences.

TikTok’s unstoppable relevance and its competitors

As of 2021, TikTok’s owner ByteDance has been the leading unicorn company worldwide – with 350 billion U.S. dollars in company value, surpassing companies like Elon Musk’s SpaceX. According to brand value, the short-video giant does not overcome Google, Facebook, and Instagram yet, but it has made its way into top three social media platforms offering the best social commerce experience as of 2022. In addition, TikTok reached the highest engagement rates among other daily-used social media mobile apps. With users spending 95 minutes on average on the platform daily, not only did it lead the chart but also scored almost double than both Instagram and Facebook. Taking into account its highly competitive rates, TikTok’s upward development path is worth following.
This text provides general information. Statista assumes no liability for the information given being complete or correct. Due to varying update cycles, statistics can display more up-to-date data than referenced in the text.
Published by Statista Research Department, Jan 6, 2023

Most popular brands on TikTok 2022, by number of followers 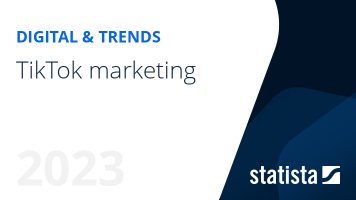 The most important key figures provide you with a compact summary of the topic of "TikTok marketing" and take you straight to the corresponding statistics.