Published by
Lucie Jeudy,
Jun 8, 2022
Is the 2022 presidential election a sign of the collapse of the bipartisan system? In the first round on April 10, the candidate of the Parti Socialiste, Anne Hidalgo, and the one of Les Républicains, Valérie Pécresse, both obtained scores of less than five percent. At the time of his election, Emmanuel Macron defended a transpartisan approach that was supposed to go beyond traditional cleavages, which he deemed obsolete. The approach taken by the candidate was confirmed during the first round, as three main blocks of ideas confronted each other. The three leading parties were indeed those of the outgoing president, the far-right candidate Marine Le Pen, and the candidate of France Insoumise, Jean-Luc Mélenchon. This realignment marks a historic setback for the two parties that had been present in French political life since the beginning of the Fifth Republic in 1958 and which led the country alternately for thirty years until 2017.

While the media discourse has largely focused on security and immigration, to the detriment of other major issues, such as climate change or violence against women, the main concern of the French during this campaign was actually purchasing power. This issue has been at the heart of many protests during the five-year term, the most emblematic being perhaps that of the yellow vests, and the challenges it raises have also been reinforced by the COVID-19 pandemic and recently by the geopolitical crisis in Ukraine.
Unsurprisingly, the COVID-19 crisis and the health system are the second and third concerns of the French in this election. The COVID-19 pandemic has killed more than 142,000 people on the French territory, and at the heart of this health crisis, the situation of French hospitals has been in the spotlight since March 2020. The problems put forward by the French regarding health are mainly related to hospitals and health personnel. As of Janaury 2020, 60 percent of people surveyed considered the recruitment of healthcare staff as the number one problem, and almost half of them believed that increasing their salary was a priority.

Ecological, economic and social assessments of the Macron five-year term

The Citizens' Convention for Climate was a democratic initiative set up by President Macron, whose members were drawn by lot to make proposals to reduce CO2 emissions in France. Among all the recommendations, only ten percent were retained by the government. France had committed in 2015 at the COP21 to reduce its CO2 emissions by at least 40 percent by 2030, and this relatively weak implementation of environmental measures may handicap the country in the race to reduce greenhouse gas emissions.
Regarding the economy, the French GDP has recovered strongly from the 2020 recession. Employment in France has suffered little from the economic and financial crisis of spring 2020, and at the end of 2021, the unemployment rate was at its lowest in more than a decade. However, the wealth gap between the richest and the poorest has widened. The wealthiest one percent have seen their standard of living increase as a result of the socio-fiscal measures implemented during during these five years. By contrast, the five percent that are least wealthy have seen their living standards decrease.

Abstention, the first party in France?

More than one in four voters did not go to the polls in the first round of elections, which is the highest abstention rate recorded in a presidential election since 2002 and the confrontation between Jacques Chirac and Jean-Marie Le Pen. During the regional elections of 2021, abstention was also historically high, and two out of three French people did not vote. For the French, this phenomenon is above all the sign of a growing gap between the elected representatives and the people, underlining the poor health of the democratic process. Although abstention, tended to be lower in the second round of voting than in the first, between 1974 and 2012, the opposite happened in 2017 and could happen again on Sunday, April 24.

In the following 5 chapters, you will quickly find the 35 most important statistics relating to "Presidential elections in France 2022".

Statistics on the topic
Abstention rate
26.3%
Emmanuel Macron's score in the first round
27.85%
Main concern of the French
Purchasing power

The most important key figures provide you with a compact summary of the topic of "Presidential elections in France 2022" and take you straight to the corresponding statistics. 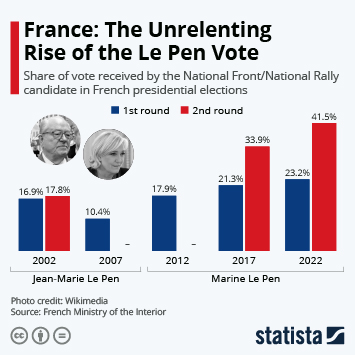