The technological development of the last decades has been marked by the rapid and growing adoption of the internet. However, this hyperconnectivity has made the common user, as well as governments and companies, a new target for criminal activity. Protecting networks, systems and data from cyber-attacks has thus become a must for anyone connecting to the Web. In 2019, the cybersecurity market in Latin America was evaluated at almost 12.9 billion U.S. dollars, and was estimated to reach double this value by 2025. Among the countries in the region most targeted by cyber criminals are Brazil, Mexico, and Colombia, which combined account for almost 9 out of 10 attacks registered in Latin America.

Attack trends and incidents in companies

Cyber attacks come in all shapes and sizes. Worms, trojans, spyware, ransomware, the list is long. Malicious software, commonly known as malware, infiltrate the software of any device. In Latin America, Argentina, Mexico and Brazil were in the top five countries with the highest percentage of internet users on computers as well as on mobile devices affected by malware in 2020. Although for many these attacks can go almost unnoticed, certain offensive actions can pose a serious threat to companies and organizations, leaving behind significant economic damage. In 2019, Ecuador and Paraguay topped the list of Latin American countries where companies suffered the most cyber security incidents. According to a survey, 70 percent of IT managers of companies in these two countries stated having this type of incident. Among the main incidents reported were malware infections, followed by unauthorized access to applications and/or databases. Although less recurrent in the region, up to 65 percent of organizations surveyed in Brazil in 2020 reported suffering ransomware attacks, against 44 percent in both Mexico and Colombia.

How are these threats prevented and handled?

On the one hand, the governments of several Latin American countries have already established cybersecurity strategies, while businesses and organizations are implementing IT security policies and basic digital security measures to prevent these attacks. In 2019, Colombia was, for instance, the country in the region where the highest percentage of companies had implemented cybersecurity policies, and where most businesses used antivirus and backup as a security measure. Although a large portion of the time spent by IT teams on security in Brazil, Mexico and Colombia is allocated to preventing cyber threats, all three countries spend almost a third of their time responding to attacks on their systems. In addition to the incidents themselves, information technology professionals in these Latin American economies have had to deal with a lack of trained staff. When asked about the impact of the lack of qualified personnel, there was a consensus among IT teams in these countries that this is one of, if not the biggest, problem for organizations to provide IT security.
This text provides general information. Statista assumes no liability for the information given being complete or correct. Due to varying update cycles, statistics can display more up-to-date data than referenced in the text.

Value of the cybersecurity market in Latin America 2021-2027 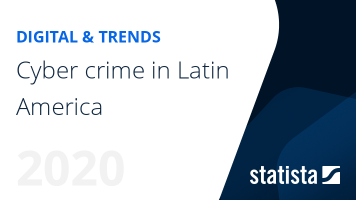 The most important key figures provide you with a compact summary of the topic of "Cyber crime in Latin America" and take you straight to the corresponding statistics.