News on the coronavirus began circulating in late 2019 as China reported its first cases in December 2019, but life for most global citizens remained largely unaffected until measures were introduced to curb the spread of the disease.
Suddenly, movie premieres, concerts, and festivals among many other media events were cancelled, and entertainment venues closed to prevent mass gatherings in public spaces. In the United States, cancellations and postponements were met with varying levels of support. Political affiliations affected opinions on the measures taken, with those hailing from right-leaning political parties saying that they believed the media was paying too much attention to the pandemic.

In spite of differing opinions on media coverage, U.S. consumers were among the world's most engaged news consumers when it came to searching for updates on COVID-19. A global study revealed that almost 40 percent were following news about the coronavirus at least once a day, compared to 35 percent of consumers in Italy and Germany. Accessing news on the virus has been at the forefront of many consumers' minds since COVID-19 hit their country, and in an era where fake news is an ongoing concern, audiences have been cautious about which news sources to trust. By 2021, young people worldwide were choosing mostly national level media, such as newspapers, TV, and radio to get information about the coronavirus, followed by active search engine research and international media as well. Social networks were the least used source of COVID-19 news.

In countries all over the world, TV, SVoD and news consumption grew as consumers balanced entertaining themselves with keeping up to date. Spanish consumers turned to television and on-demand streaming services to keep themselves occupied during lockdown. Several news sites in Italy saw audience growth of more than 100 percent, and live TV viewing in the United Kingdom jumped by almost 50 percent, and many consumers around the world opted to spend their time on video games and eSports.

The economic implications of the coronavirus will take time to fully manifest themselves. However, it is clear that as events companies and other physical media outlets will endure serious long-term losses, streaming services could see an uptick in usage and subscribers in the coming weeks and months. In fact, at the beginning of 2021 consumers are already keener to continue using VoD services, even for first-run movie consumption. News sites will also continue to see an increase in traffic, but this will level out as life begins to return to relative normality.
This text provides general information. Statista assumes no liability for the information given being complete or correct. Due to varying update cycles, statistics can display more up-to-date data than referenced in the text.

A. Guttmann
Research Lead covering advertising and marketing
Get in touch with us now
Published by A. Guttmann, Nov 15, 2021 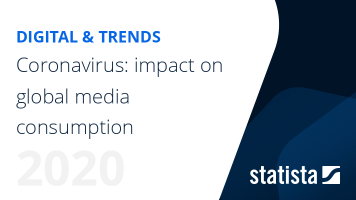