In the past few years, social media has become integrated into the daily life of most Vietnamese alongside Vietnam’s increasing smartphone and internet penetration rates. Thanks to its highly connected and young, digital-savvy population, the country has been among the nations with the highest number of social media users worldwide. Since their appearance, the usage of these networks has been extended from staying in touch with friends and family to being powerful tools employed by brands to reach their consumers both domestically and internationally. As a result, in a market with heavy social media usage like Vietnam, social-media related strategies such as social commerce and influencer marketing are vital to winning over the market.

What are the most popular social networks in Vietnam?

Vietnam has a population reaching close to 100 million people, with the number of social network users amounting to around 75 million in 2022. In 2022, approximately 94 percent of Vietnamese internet users used Facebook, making the international platform the leading social media channel in the country. At the same time, Zalo, a local messaging app, has consistently been the second most popular social network surpassing other global players such as YouTube and Instagram.

The popularity of social media platforms varies from generation to generation. While Facebook and Zalo have the highest preference among millennials and Gen X, Gen Z has a significantly higher usage of international networks, including Facebook, YouTube, and Instagram. Additionally, TikTok is gaining momentum among the youngest generation of social media users in the country, with over 70 percent of the internet users in this age group reported being active on this platform as of the first quarter of 2022. Meanwhile, several Vietnamese platforms, such as Gapo and Lotus, have been released in recent years, hoping to gain a fraction of the market. On the other hand, their market share remains modest due to the lock-in effect of existing competitors.

How businesses are using social media in Vietnam?

Apart from their original function of connecting people, social networks are now seen as sources of information, brand communication outlets, advertising platforms, and even marketplaces by brands and consumers globally. In Vietnam, social media-based strategies such as influencer marketing and social commerce are essential for many businesses to capture the market. Influencer marketing uses well-connected persons, also known as influencers, to affect consumers’ quantifiable actions and eventually purchases of an endorsed product on social platforms. In 2020, the share of Vietnamese following at least one influencer on social media reached around 84 percent, and 77 percent of them reported having bought an item because of influencers’ sponsorship. Social commerce, on other hand, turns these platforms into live selling and buying channels that support direct interaction among participants. This commerce form has been enjoying healthy growth and is now one of the online shopping platforms with the highest penetration rates in Vietnam, indicating the potential of social media as the future one-stop-shop among Vietnamese.
This text provides general information. Statista assumes no liability for the information given being complete or correct. Due to varying update cycles, statistics can display more up-to-date data than referenced in the text.
Minh-Ngoc Nguyen
Research Expert covering Vietnam
Get in touch with us now
Published by Minh-Ngoc Nguyen, Jul 14, 2022 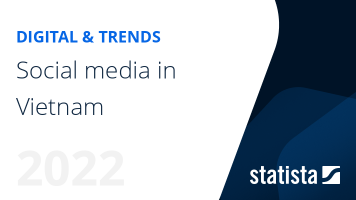 The most important key figures provide you with a compact summary of the topic of "Social media in Vietnam" and take you straight to the corresponding statistics.