Published by
Julia Stoll,
Feb 8, 2022
The global over-the-top TV and video industry is developing quickly. In 2020, the revenue of the market amounted to 106 billion U.S. dollars, and this figure is projected to rise to over 210 billion by 2026. The penetration rates of virtual multichannel video programming distributors (commonly abbreviated as vMVPD) and broadband-only TV in the United States have steadily increased over the past years, while pay TV services have lost popularity.

Today’s U.S. online TV users are mostly from the younger generations, with around one hour and 40 minutes per day spending with connected TV among consumers aged 18 to 34 years in the third quarter of 2020. Their reasons for signing up for streaming video services are clear – content, cost, and convenience are of high importance to these consumers. Cost seems to be the single most important factor in people’s decision, with 55 percent of consumers who cancel their subscription stating that the price became too expensive.

Although online TV formats are gaining more and more enthusiasts, traditional TV has also experienced a small upturn in recent years. In the 2020/21 season, the number of TV households in the United States is due to increase to 121 million, following the slump to 114.2 million in the 2012/13 season. There is nevertheless a new phenomenon of cord-cutting developing which is seeing people turn to alternative methods to catch up with their favorite shows. In 2020, there were an estimated 7.8 million cord-cutting household additions in the United States and about 50 million non-pay TV households, a figure that is forecast to increase to 72 million by 2025.

The market leader of the U.S. vMVPD industry is Hulu Live, with four million subscribers in the fourth quarter of 2020. However, while the second placed distributor, YouTube TV, provides the most channels, namely 79 as of January 2022, Hulu made 73 channels available on its platform. AT&T’s DirecTV Stream and FuboTV followed in the ranking. All four services provide major U.S. television channels such as ABC, CBS, and Fox.
Although traditional pay TV subscribers have moved to online TV channels and vMVPDs have gained more and more customers within the past years, this development is slowing down. While online TV providers increased their subscriber base by over 3.2 million in 2018, this number declined to around two million as of 2020.

In the following 5 chapters, you will quickly find the 27 most important statistics relating to "Online TV in the United States". 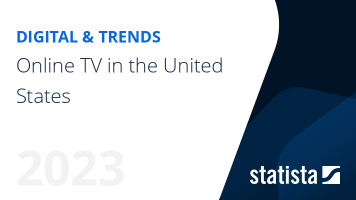 The most important key figures provide you with a compact summary of the topic of "Online TV in the United States" and take you straight to the corresponding statistics.