The tablet market in the United States is the largest globally, accounting for around one-third of tablet unit shipments annually. While tablet sales have been stagnant and even declining worldwide, the U.S. market has proven resilient with stable tablet device sales and even growing shipments at times. This trend can be attributed to the general popularity of tablet devices in the country - more than 50 percent of adults said they own a tablet in a recent Statista survey. Looking ahead the U.S. tablet market is projected to fall in line with the global trend and shipments are projected to decrease in upcoming years.

Apple iPad is the market leader

The California-based tech company Apple is a pioneer in the global tablet market and holds a dominant position in the U.S. tablet market with its iPad product line. Almost 60 percent of tablets in the United States are Apple devices, with Samsung and Amazon filling out the top-three. These two competitors of Apple together account for around one-third of the total market, roughly half of Apple's share. The iPad's iOS operating system powers nearly 60 percent of all tablets in the U.S., with its biggest competitor, Android, controlling most of the remaining 40 percent of the market.

The average lifespan of tablets in the United States dipped significantly from more than seven years in 2019 to around five years as of 2021. This development could be due to the introduction of newer device generations in the past couple of years, replacing older devices purchased when tablets first started to became popular around 2014 . The most popular activities for U.S. tablet users are accessing the internet, watching digital video content, online shopping, listening to digital music content or podcasts, and playing video games.
This text provides general information. Statista assumes no liability for the information given being complete or correct. Due to varying update cycles, statistics can display more up-to-date data than referenced in the text.

Thomas Alsop
Research expert covering the global hardware industry
Get in touch with us now
Published by Thomas Alsop, Feb 9, 2022 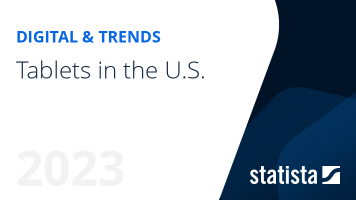 Go to report Tablet market in the U.S.
Top Seller

The most important key figures provide you with a compact summary of the topic of "Tablet market in the U.S." and take you straight to the corresponding statistics.