Published by
Mathilde Carlier,
Sep 22, 2021
Headquartered in Germany, Mercedes-Benz is a subsidiary of Daimler which produced the first vehicles under its brand in 1926. In 2020, Daimler AG's revenue reached over 154.3 billion euros (around 182.67 billion U.S. dollars with an exchange rate of one euro equaling 1.18 U.S. dollars as of August 31st, 2021). Its Mercedes-Benz Cars' revenue amounted to just under 98.6 billion euros (around 116.3 billion U.S. dollars).

The state of the brand

Mercedes’ global brand value climbed to 25.8 billion U.S. dollars in 2021, after it dropped in 2019 and 2020. The name Mercedes Benz has been associated with premium automobile brands for a long time and has enjoyed a loyal customer base in high economy markets, including the United States. Consequently, the company has maintained a fairly strong rate of consumer satisfaction in the U.S. in 2020. That same year, Mercedes-Benz Cars’s vehicle sales reached over 248,800 units in the United States. Europe was the leading market for the brand, with sales three times higher than the ones recorded in the U.S. The company’s van segment was smaller, with worldwide sales below 375,000 units in 2020.

Mercedes-Benz in the broader market

Mercedes-Benz Cars’ most popular vehicle type worldwide was in its sport utility vehicle segment, which dwarfed all other vehicle classes in 2020. A year earlier, Toyota and Volkswagen ranked first and second as the leading SUV producers worldwide, with brand values of 52.3 and 41.7 billion U.S. dollars. Mercedes-Benz further ranked third in the most valuable brands in the automotive sector worldwide in 2021, behind Tesla and Toyota. In the U.S., Daimler also held some 2.2 percent of the market a year earlier. However, Mercedes’ luxury vehicle segment was more popular in the country, its shares climbing to 13.54 percent. This was the same market share as Toyota’s luxury brand Lexus.

In the following 4 chapters, you will quickly find the 22 most important statistics relating to "Car brands: Mercedes-Benz". 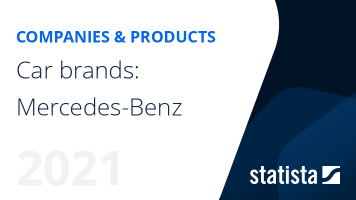 The most important key figures provide you with a compact summary of the topic of "Car brands: Mercedes-Benz" and take you straight to the corresponding statistics.