Published by N. Sönnichsen, Jun 15, 2021
The global energy sector has been hit hard since the outbreak of COVID-19 in early 2020. There have been thousands of job losses across the sector, as well as bankruptcy filings. The restrictions imposed by world governments have seen millions of people confined to their homes throughout the year, which had a substantial impact on travel and work. As a result, energy demand plummeted four percent in 2020, relative to 2019. While the pandemic continues to impact the energy sector into 2021, projections show that as lockdown restrictions are eased around the world and vaccination rollouts gain traction, energy demand in 2021 will rise above pre-pandemic levels.

The fall in demand also caused crude oil prices to drop to an all-time low, especially in the early stages of the pandemic in 2020. Despite the historic slump, oil prices had climbed back up to pre-pandemic levels by early 2021 due to rising demand and cuts in production.

Overall, global electricity demand fell 0.1 percent in 2020 compared with 2019. Electricity generation from coal and nuclear energy fell roughly four percent, while gas-fired electricity was cut by one percent. In contrast, electricity produced by renewables increased by roughly 18 percent. Output from wind and solar increased in all but two G20 countries, while coal power only increased in China. While other energy sources have faced significant disruptions during the pandemic, renewables have weathered the storm. In 2020, 93,000 megawatts of wind power capacity were installed worldwide. It is estimated that capital expenditure for renewable energy projects worldwide will amount to 240 billion U.S. dollars in 2021.

In the following 7 chapters, you will quickly find the 46 most important statistics relating to "Coronavirus (COVID-19): impact on the energy industry".

The most important key figures provide you with a compact summary of the topic of "Coronavirus (COVID-19): impact on the energy industry" and take you straight to the corresponding statistics.

Coronavirus (COVID-19) in the CEE region

Coronavirus (COVID-19) in the Middle East and North Africa 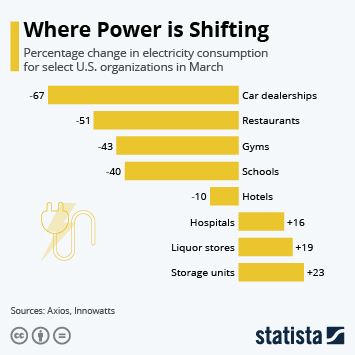 electric consumption due to covid