Facebook was founded in 2004 by Mark Zuckerberg, Eduardo Saverin, Chris Hughes, and Dustin Moskovitz to create a space where Harvard University alumni could stay in contact and share content easily. Nowadays with its founder Mark Zuckerberg heading the ranking of the world's richest social media entrepreneurs, and having the highest active users of any social networks worldwide, Facebook has long surpassed its fledgling days as a dorm room project. The number of monthly active Facebook users had exceeded two billion roughly 15 after its foundation, being the largest audience size located in India, followed by the United States, Indonesia, and Brazil.

Facebook's founders were determined to spread the popularity of this social network as far as possible. Therefore, by the middle of 2007, Facebook had launched versions in French, German, and Spanish to boost its appeal outside the United States. Currently, there are over 20 million Facebook users in Spain, most of them concentrated in Madrid and Barcelona. The social network is especially well-known among millennials and both genders seem to have succumbed to Facebook evenly.

As profitable as famous?

In spite of its high penetration in Spain, the company reported losses in the Mediterranean country up to 2017. This contrasts with the firm's global business figures, which showes higher revenue and net income for the company. According to the explanations provided later, the Spanish subsidiary acts as an intermediary for the Facebook group and charges a commission for the provided services to the parent company. However, scandals related to tax evasion or questionable usage of users’ personal data do not seem to have unfavorably influenced Facebook’s reputation.

As far as user awareness is concerned, Facebook is more popular than any other social network in Spain, and its messaging apps, Facebook Messenger and WhatsApp, top the daily active users list in Spain’s Google Play Store. Its friendly user design, its versatility, and the possibility of following influencers, brands, media or even banks have turn this network into one of the most relevant social communication channel in the present day.
This text provides general information. Statista assumes no liability for the information given being complete or correct. Due to varying update cycles, statistics can display more up-to-date data than referenced in the text.

Business fact and figures in Spain 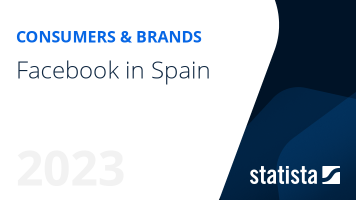 The most important key figures provide you with a compact summary of the topic of "Facebook in Spain" and take you straight to the corresponding statistics.