In 2017, the global number of monthly active Facebook users surpassed two billion for the first time, and has continued to grow ever since, reaching nearly 2.9 million at the start of 2021. There are close to 260 million Facebook users in North America, almost double the number reported in early 2010, and 190 million in the U.S. alone. The United States is one of the leading countries based on number of Facebook users, second only to India who had 260 million users as of April 2019.
Unsurprisingly, Facebook is by far the leading social media site in the United States based on number of visits, commanding around 72 percent of all social media site visits in the country. By comparison, Twitter’s market share is less than ten percent.

Among younger users though, Facebook is not the dominant force it once was. Back in 2012, a survey revealed that Facebook was the most popular social network among teenagers in the United States. A total of 42 percent cited the platform as their favorite, three and a half times the share of respondents who said the same about Instagram. By the fall of 2020 though, the figures told a very different story. Facebook’s popularity among teenagers began to wane as they turned their attention to Snapchat, TikTok, and Instagram, and the percentage of teens naming Facebook as their preferred social platform dipped at just two ten percent. For several years now, Snapchat has been the favorite among teens in the U.S., with Facebook and Twitter trailing far behind. Facebook’s user demographic in the United States is mostly made up of Millennials, with 25 to 34 year olds accounting for the largest of share Facebook users in the country. Conversely, less than three percent of Facebook’s U.S. users were aged between 13 and 17 years.

One of the interesting aspects of social media is that each platform has its own focus and as such offers a different user experience. Whilst Pinterest is the most popular social site for find or shop for products and Instagram is predominantly used for viewing photos, users looking to share content with their friends, family and followers head to Facebook. The main reasons for using Facebook are staying in touch with friends or family, and users have estimated that most of their loved ones have a Facebook account.

Sadly, Facebook usage can cause problems and does not always offer a positive experience. Facebook is the number one social site for cyber bullying, ranking far ahead of Twitter, Instagram, YouTube, and online gaming sites in this regard. User data is also a key issue, and a survey revealed that the majority of U.S. adults thought Facebook failed to safeguard personal data and did not believe the company would do enough to change this in the future. Concerns about online security and privacy affect social commerce, with many users expressing concern about the legitimacy of transactions and whether or not purchasing directly through social media is safe. This could potentially have a negative affect on the companies using Facebook for marketing purposes, and given the global issue of fake news, cybercrime and data abuse, it is important that social networks work to provide a safe, worry-free user experience.
This text provides general information. Statista assumes no liability for the information given being complete or correct. Due to varying update cycles, statistics can display more up-to-date data than referenced in the text.
Published by S. Dixon, Nov 22, 2022

Leading news websites in the U.S. 2022, by monthly visits 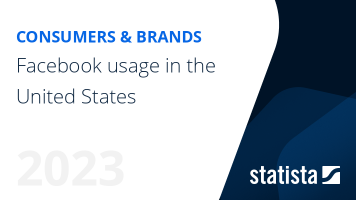 The most important key figures provide you with a compact summary of the topic of "Facebook usage in the United States" and take you straight to the corresponding statistics.