Published by Statista Research Department, Oct 11, 2022
The ever-expanding South Korean advertising market is one of the largest advertising markets worldwide. While it has shown steady growth over the previous years, many industries slashed their advertising budgets in 2020, leading to a fall in revenue for advertising companies. Some, however, such as the shopping sector, increased their spending on ads as their services were well-suited to customer convenience during the beginning stages of the coronavirus (COVID-19) pandemic. Cheil Worldwide Inc., one of the Asia-Pacific’s leading advertising agencies, reflects this experience, with a decrease in their 2020 revenue, followed by a recovery in 2021.

The rise of online advertising

One fast-growing sector amongst different online advertising formats is influencer marketing. The influencer market could be considered an extension of the larger social media advertising market. While the concept of a public person’s endorsement of a product or service is nothing new, the more traditional choice would be a celebrity popular with the general public hired on as a spokesperson or to star in commercials. Influencers, on the other hand, generally derive their influence from their own content production, usually distributed online. In South Korea, online influencers have become the most popular type of influencer to buy products from. As most agencies take a mixed-media approach to advertising, and influencer marketing is still a relatively new phenomenon, this type of advertising does not yet generally make up a large share of marketing budgets.

In the following 5 chapters, you will quickly find the 28 most important statistics relating to "Advertising industry in South Korea". 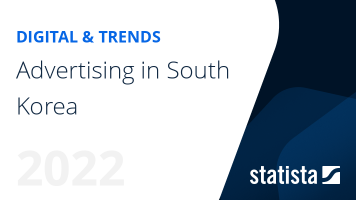 The most important key figures provide you with a compact summary of the topic of "Advertising industry in South Korea" and take you straight to the corresponding statistics.