Croatia is a rather small country located in the Southeastern Europe, bordering the Adriatic Sea and five countries. Its capital, Zagreb, is the largest city in the country, and it is home to roughly 700,000 inhabitants. Since 2010, when overall population figures for Croatia reached their highest peak, the numbers have been on a decreasing trend. Over the following five years, the population of the country shrank by more than 200,000 inhabitants, a decline that is still ongoing and mirrored in the fertility rate. In 2015, the fertility rate amounted to 1.46 children per woman, the lowest quota since 2006. However, regardless of the negative trends in population and the fertility rate, life expectancy in Croatia has shown a positive boost in the last years, the average life expectancy at birth reaching its own peak value so far, at 77.48 years, in 2014.
The republic of Croatia, formally known as Socialist Republic of Croatia, was part of Yugoslavia, together with Serbia and Slovenia. Yugoslavia was an independent communist state ruled by the infamous Marshal Tito. Croatia declared its independence in 1991, but it was only four years later when the Serb armies cleared the Croatian territories. Today, Croatia is a parliamentary republic and is divided into 20 counties. The official language spoken is Croatian, but in addition, other languages, such as Serbian or Czech, are spoken by a small percentage of the population. The state has joined the NATO in 2009, and was the one of the latest members to join the European Union in 2013.

Financially, Croatia was one of the wealthiest countries in former Yugoslavia, which helped the country’s economy until 2008, when due to the world financial crisis, the state's economy experienced a financial slump. Economic growth has been negative since 2010, but recovered in 2015 and is now estimated to continue out of the red at least until 2022. The most important economic sector is the services one, with a share of almost 70 percent in the country’s GDP. Travel and tourism represent two of the primary economic industries in Croatia, directly contributing almost 40 billion Croatian Kunas to the Croatian economy in 2017. The most important export partner is Italy, and Germany is the main import partner.
This text provides general information. Statista assumes no liability for the information given being complete or correct. Due to varying update cycles, statistics can display more up-to-date data than referenced in the text.

Croatia and the coronavirus 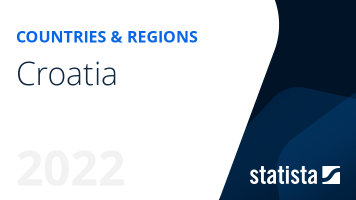 The most important key figures provide you with a compact summary of the topic of "Croatia" and take you straight to the corresponding statistics.