Published by Jan Conway, Feb 25, 2022
Brown-Forman is one of the major players in the global spirits industry, producing such iconic brands as Jack Daniel’s, Woodford Reserve, and Korbel to name a few. The company was founded in the 19th century in Kentucky and has since expanded internationally, acquiring more than a few international brands. In the United States, Brown-Forman makes up a six percent dollar sales share of the total distilled spirits market, making it the sixth largest distilled spirits company, in terms of sales.
Brown-Forman has seen an increase in net sales between 2011 and 2021, from about 2.6 billion dollars to over 3.4 billion in that time period. Half of the brand’s total net sales is attributed to the United States, with Europe making up the second largest market. Although Brown-Forman owns two wine companies, only a tiny percentage of their sales come from wine; they are much more known for being a spirits manufacturer. In 2021, the company employed about 4,700 people.

The company’s advertising expenditure has fluctuated slightly over the last several years but has stayed more or less stable at around 400 million per year. Jack Daniel’s, being the most popular brand that Brown-Forman owns, receives the most advertising funding, at around 28 million dollars, followed by Gentleman Jack, Herradura and Woodford Reserve.

In the following 4 chapters, you will quickly find the 24 most important statistics relating to "Brown-Forman". 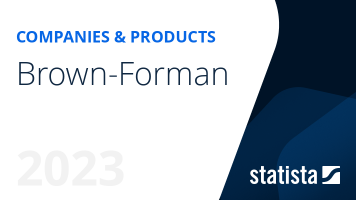 The most important key figures provide you with a compact summary of the topic of "Brown-Forman" and take you straight to the corresponding statistics.

Cognac market in the United States