Published by Jan Conway, Dec 9, 2021
Constellation brands is a beverage company founded in 1945 and headquartered in Victor, NY. The firm offers beverages in approximately 100 countries today and operates more than 40 facilities globally. The extensive product portfolio includes beer, wine and spirits. The company is among the leading beverage companies worldwide.

Despite the COVID-19 pandemic, Constellation Brands was able to grow its net sales in 2020 by three percent to 8.6 billion U.S. dollars. Nearly all of the company's sales were generated in the United States. Constellation Brands has increased its advertising spending every year for the last eight year, with 2020 reaching over 800 million U.S. dollars.

Beer brought in the lion’s share of the company’s net sales in 2020, followed by a significant share from wine. Spirits accounted for the smallest portion. Constellation Brands is one of the biggest wine producers in the world and through a 2013 acquisition of Grupo Modelo's state-side beer business became the largest beer importer in the United States. Aside from Modelo, Constellation Brands also markets Corona in the United States, among other beer brands. The company's beer sales have grown substantially since the acquisition. In 2020, sales increased a further eight percent to over six billion U.S. dollars. In contrast, sales of both wine and spirits declined in 2020.

In the following 4 chapters, you will quickly find the 24 most important statistics relating to "Constellation Brands ". 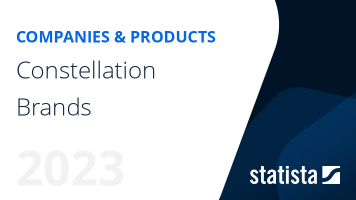 The most important key figures provide you with a compact summary of the topic of "Constellation Brands " and take you straight to the corresponding statistics.