Published by Statista Research Department, Feb 1, 2022
The first Romanian brewery, Timișoreana, was established in 1718. Nevertheless, the beer market in Romania has a very old history, with first written mentions of beers and brewers dating back to the Middle Age period. Beer became increasingly popular in the following centuries, which led to a high number of breweries and better brewing systems. However, after the fall of communism in 1989, the Romanian beer market witnessed a long process of privatization. As a result, many breweries were closed. Romania’s alcoholic beer history led to a market revenue of 2.3 billion U.S. dollars in 2021, which is expected to further increase in the coming years.
While the beer market revenue from hospitality amounted to 443 million euros in 2019, most of the market revenue was generated by beer retail sales. Unfortunately, the hospitality sector was severely impacted by the coronavirus (COVID-19) pandemic — bars, restaurants, and hotels were closed for several months in 2020. This led to a decrease in the beer market revenue of over 200 million euros compared to the previous year.

Ursus Breweries is a key player on the Romanian beer market and has been a subsidiary of Asahi Breweries Europe since March 2017. The company began its activity in Romania in 1996, when South African Breweries purchased Vulturul Buzău. By 2020, Ursus Breweries became the most important company in the beer production industry, totaling a revenue of more than two billion Romanian lei. Currently, Ursus owns three breweries in Buzău, Timișoara, and Brașov, as well as a craft mini-brewery in Cluj-Napoca. At the same time, the company offers approximately 13 Ursus beer varieties and another 14 beer brands such as Timișoreana, Peroni and, Grolsch.

The beer sector is an essential factor in Romania’s economic growth, not only because of the industry itself but also because of its impact in the agriculture, tourism, and retail industries. In 2020, one job position in the beer production industry generated two positions in the agriculture sector and three positions in the hospitality sector. Over 60 thousand persons were employed in other sub-industries related to the beer production sector. Moreover, there were around six thousand individuals directly employed in the beer brewing industry in 2019.
The biggest companies in the beer production industry are Ursus and Heineken Romania, each totaling over one thousand employees in 2021. However, despite Ursus Breweries being the market leader in terms of revenue and employees, the company offered an average monthly salary of only 5.2 thousand Romanian lei. By contrast, Heineken paid the highest average net monthly salary in the beer industry, at 6.4 thousand Romanian lei.

In the following 7 chapters, you will quickly find the 38 most important statistics relating to "Beer market in Romania". 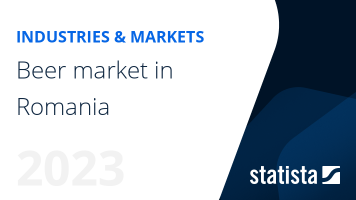 The most important key figures provide you with a compact summary of the topic of "Beer market in Romania" and take you straight to the corresponding statistics.