After the 2019 figures from the Community Security Trust (CST) revealed a record high of 1,805 antisemitic incidents in the UK for the year, the latest report shows that this was far from an outlier. The 2020 number of 1,668 is the third-highest recorded and, as summarised by the government’s Independent Adviser on Antisemitism, Lord Mann: "Whilst the CST figures show a decrease in antisemitic hate incidents in 2020, these figures are worryingly still the third-highest ever recorded by CST. It is clear that Covid-19 has led to a rise in antisemitic conspiracy theories and the use of dangerous alternative media platforms. Whilst it is partly to do with better reporting and knowledge, it is worrying that this trend isn't coming down".

Regarding the nature of the incidents, CST reports that there were 100 cases of assault/extreme violence, 72 of damage and desecration of Jewish property, 1,399 reports of abusive behaviour (including verbal abuse, antisemitic graffiti, antisemitic abuse via social media and one-off hate mail), 85 direct antisemitic threats, and 12 cases of mass-mailed antisemitic leaflets or emails.

Commenting on the report, National Policing Lead for Hate Crime, Deputy Chief Constable Mark Hamilton said: "We concentrate on the unacceptably high numbers of antisemitic incidents in comparison with other states, but I believe that this disparity is because of improved partnerships and recording practices and I genuinely believe that the United Kingdom is amongst the safest places in the world for Jewish citizens. However, one crime is too many and everyone has a right to live their lives free from targeted abuse. I would encourage all victims of hate to report crimes, either to the police or to the CST." 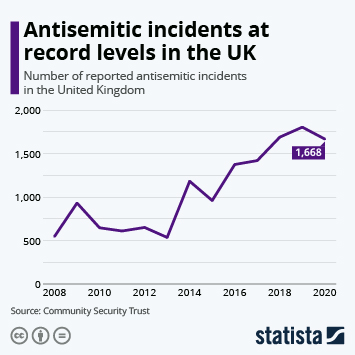 This chart shows the number of antisemitic incidents reported in the United Kingdom from 2008 to 2020.