In many European cities, investments in bike infrastructure and public transportation systems have been successful in enticing commuters to ditch their cars in favor of buses, trains or bicycles. In Germany for example, 23 percent of commuters take the bike to get to work, school or university and another 26 percent use public transportation. Meanwhile, 65 percent take their own car, which still sounds like a lot but is considerably lower than it is in the United States. In the Netherlands, arguably the country most famous for its love of bicycles, 36 percent of commuters take their bike to work while 56 percent opt for their car instead.

Americans still largely rely on their car to get to work and back. According to Statista’s Global Consumer Survey, 76 percent of American commuters use their own car to move between home and work, making it by far the most popular mode of transportation. Meanwhile, only 11 percent of the 5,649 respondents use public transportation while 10 percent ride their bike. As our chart shows, alternatives to the car have become more popular since 2019, but none comes close to challenging the car's status as the king of the American commute.

There are several factors contributing to the low adoption of bicycles as a means of everyday transportation: for one, Americans are used to commuting longer distances than people in most European nations, automatically ruling out the bike for many. And secondly, many major cities in the U.S. aren’t exactly bike-friendly. According to a recent study, just three American cities made it into the 50 most bicycle-friendly cities in the world, when taking into account factors such as bicycle infrastructure, safety and usage as well as things as mundane as the weather. 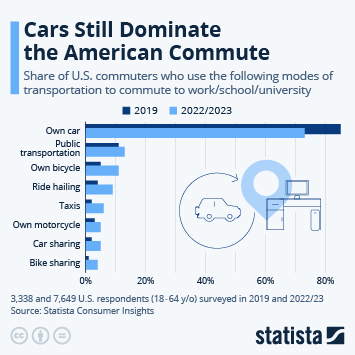 This chart shows which means of transportation commuters in the U.S. are using.