In contrast to the wide-eyed undergraduates in universities across America, the typical business school student in the United States begins with a greater idea of their place in the world. Many pursuing a Master’s degree in business today see the degree as an opportunity to upskill or advance their career having already been part of the workforce. In recent years, 14 percent of those applying for an MBA in the United States and Canada had an employment background in the financial services industry. For those students looking to advance their career, leaving their current job is often undesirable as it may lead to dropping back down the career ladder on their return. For this reason and others, part-time MBA programs are highly popular among students. In the 2013/14 school year, 37 percent of MBA students were pursuing their degree part-time during evenings and weekends.
Given their business knowledge and experiments, those pursuing a graduate business degree have hopefully considered the investment value of such a pursuit. Changes in the job market, degree inflation, and increased business specialization have all increased demand for qualifications beyond an undergraduate degree. Studies show that a Bachelor’s degree alone will no longer cut it. Companies are hiring more people with Master's degrees. Meanwhile, the number of Bachelor's degree holders hired has either remained stagnant or decreased depending on company size.

A recent analysis by Forbes suggested that Indiana University, University of North Carolina-Chapel Hill, and Yale are worth considering for those concerned about the debt they will accrue through their studies. The study suggested that it would take a period of 3.7, 3.8, and 3.9 years respectively to pay back the tuition debt from the MBA programs at these schools; the lowest figures in the top 20. In business terms, after such a point, the investment would simply turn a profit – withholding any existential life goal changes.

Though a Master's in business may open doors, it is better seen as an enticing plate of cookies than a key. After all, one must prove they deserve to stay in the house instead of being a temporary visitor. According to a 2014 survey, proven ability to perform, communication skills, and technical skills were far more important than a business school’s reputation. Some recent graduates manage to land a job directly out of school, most likely owing to previous experience. This however is not the case for all graduates. Many should still expect to fill entry- and mid-level positions upon graduation.
This text provides general information. Statista assumes no liability for the information given being complete or correct. Due to varying update cycles, statistics can display more up-to-date data than referenced in the text.
Published by Erin Duffin, Mar 8, 2021

U.S. business school with the highest return on investment
Stanford

Best U.S. business schools in 2015, by return on investment

Share of MBA students in the U.S. enrolled in part-time evenings/weekends study
37%

Most popular employment background of MBA applicants in the U.S. and Canada
Financial services

Employment background of MBA applicants in the U.S. and Canada in 2015 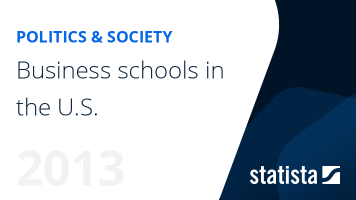 Go to report Business schools in the U.S.
Top Seller

The most important key figures provide you with a compact summary of the topic of "Business schools in the United States" and take you straight to the corresponding statistics.