Published by
Aaron O'Neill,
Apr 22, 2021
Belarus is located in Eastern Europe, bordered by Russia to the east, Ukraine to the south, Poland to the west and Lithuania and Latvia to the northwest. Officially, Belarus is a presidential republic, but it is actually known for being one of the last dictatorships in Europe, as President Alexander Lukashenko has maintained power since 1994 and his government places harsh penalties on any opposition to his rule. The country was formed during World War II, and since then it has struggled to establish its own identity; remaining closely connected to and dependent on Russia in large part because of the oil and gas industry. Belarus gets oil and gas from Russia at a significant discount and in return, large quantities of oil and gas are exported from Russia to Europe through the country. However, while once adamant allies, this is no longer as evident as it once was: Relations between the two countries have gotten tense because of disputes over energy pricing and because of Russia’s increasingly aggressive action in Ukraine, which Belarus does not support. In response, Belarus appears to be warming up to the west, but the extent to which it can do so is limited.
At present there are around 9.4 million people living in Belarus and 2 million of them live in the capital and largest city, Minsk. More than 75 percent of the country's inhabitants live in urban areas. Overall, the population of Belarus is expected to shrink continuously due to a very low fertility rate and because of an aging population. The median age of inhabitants is now below 40 years, but is expected to increase over the next few years, which indicates that more old people live in the country.

GDP growth has been faltering since 2011 and the government continues to spend upwards of 40 percent of GDP each year, resulting in a negative budget balance and soaring national debt. Meanwhile, GDP per capita is significantly lower than in the euro area, and the country is still recovering from exorbitant inflation rates upwards of 50 percent back in 2011 and 2012. Inflation still remained at around 12 percent in 2016. This places increasing stress on the inhabitants of the country. Exports also decreased significantly in 2009-10, likely linked to a struggling Russian economy faced with decreasing oil and gas prices, but picked up again afterwards. They are currently back to 2010 levels. Russia is Belarus’s most important trade partner for both imports and exports, which is why any change in the strength of the Russian economy has a direct effect on Belarus.

In the following 4 chapters, you will quickly find the 36 most important statistics relating to "Belarus".

The most important key figures provide you with a compact summary of the topic of "Belarus" and take you straight to the corresponding statistics. 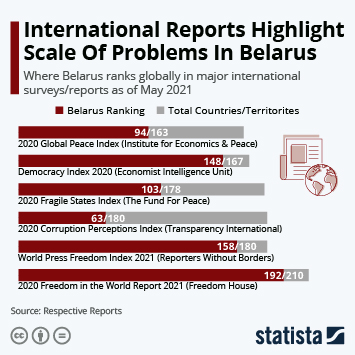 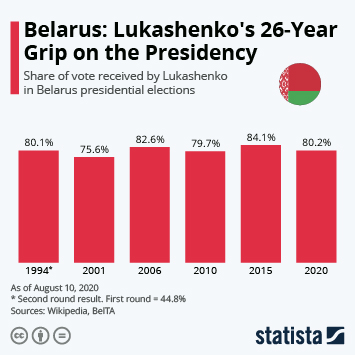