NetApp Inc. is an American cloud storage and data management company that offers software, systems, and services for the management and storage of data. Founded in 1992, the company is headquartered in Sunnyvale, California. It thrived in the internet-bubble years of the mid-1990s but experienced a decline in revenue after the bubble burst in 2001. NetApp's annual revenue climbed again after 2010 and stood at about 6 billion U.S. dollars as of the fiscal year 2021. The company is among the leading information technology (IT) storage vendors worldwide. As a consequence of strategic acquisitions, NetApp is now focusing on converged infrastructure or hyper converged infrastructure (HCI).

The largest of NetApp's segments by revenue was its "Product" segment, totaling nearly 3.3 billion U.S. dollars in 2021. The company's flagship products include NetApp's FAS (Fabric-Attached Storage), AFF (All-Flash FAS), and ASA (All SAN Array) storage systems. The company's ONTAP data management operating system has been under development continuously since 1992 and is used for several of its hardware product management. Currently, there are three ONTAP platforms: FAS/AFF systems, software running as a virtual machine on servers (ONTAP Select), and cloud computing (Cloud Volumes ONTAP). Some of the sought-after features of NetApp systems are the ease of integration of enterprise applications for data backup, cloning, provisioning, and other self-service storage.

Together, the Americas - the United States, Canada, and Latin America - account for the majority of NetApp's regional revenues worldwide. The company held a share of around 10 percent in the external enterprise storage systems market worldwide and a share of almost 20 percent in the all-flash array market. Its competitors in the enterprise storage market include Dell EMC, HPE, and Pure Storage. In 2007, NetApp filed a lawsuit against Sun Microsystems for patent infringement of file systems. After the acquisition of Sun Microsystems by Oracle Corporation, NetApp announced an agreement with the new owners to dismiss the lawsuits.
This text provides general information. Statista assumes no liability for the information given being complete or correct. Due to varying update cycles, statistics can display more up-to-date data than referenced in the text. 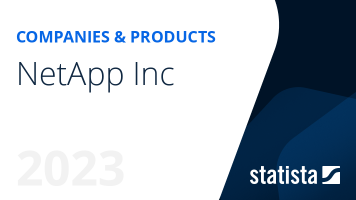 The most important key figures provide you with a compact summary of the topic of "NetApp Inc" and take you straight to the corresponding statistics.