Published by N. Sönnichsen, Feb 11, 2022
Coal is a combustible fuel and a primary energy source used as a means of electricity and heat generation. It was one of the first fuel types used by the public power sector and a major contributor to the Industrial Revolution. Within a coal power station, thermal coal such as lignite (also referred to as brown coal) and hard coal is burned to bring water to boil. The resulting water steam then drives turbines attached to generators, creating electricity. Today, coal is still the world’s largest source of electricity generation.

Coal use today and most common tech types installed

As coal is often one of the cheapest and most secure means of obtaining electricity, it has been favored by many emerging economies such as China and India. In fact, the use of coal power in China has increased so much over the past three decades that it has become the largest producer of coal-fired power worldwide. In 2020, China generated over 4,600 terawatt-hours of electricity from burning coal, which accounted for more than half of the world's coal power production. Subcritical and supercritical combustion types have historically been the most installed technologies in a coal power station. Subcritical was the first type of coal power generating process developed. However, since then more efficient means of combustion, as well as carbon capture techniques have been introduced, with ultra-super being the preferred choice today.

Global installed coal power capacity has risen to over 2.2 terawatts and is projected to reach nearly 2.3 terawatts by 2050. Many governments have introduced phase-out dates to be reached before mid-century to reduce their carbon footprint and mitigate climate change. Nevertheless, as of 2021, there was still over 400 gigawatts of coal power capacity in the pipeline.

Financial institutions such as ICBC have been the top banks for coal power companies in the past years. Of the five largest investors, four were China-based enterprises. Still, President Xi’s pledge in September 2021 to halt financing coal projects abroad is expected to potentially reduce the coal power pipeline.

In the following 6 chapters, you will quickly find the 22 most important statistics relating to "Coal energy industry worldwide".

The most important key figures provide you with a compact summary of the topic of "Coal energy industry worldwide" and take you straight to the corresponding statistics. 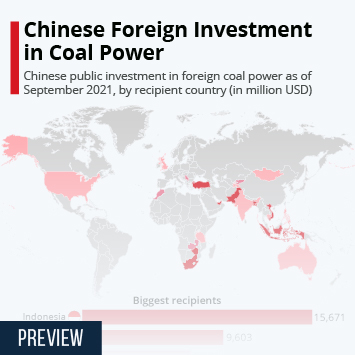