Published by Zeynep Dierks, Sep 19, 2022
Turkey’s landscape is uniquely suited for hydroelectricity generating dams. Construction of the first hydro plants began in the early 20th century and paved the way for further deployment of renewable energy technologies. With concern over wildlife and the environmental implications of large hydro plants growing, Turkey has increased solar and wind shares in the power mix.

As the most common renewable source in the country, hydropower alone accounts for nearly one fifth of Turkey’s energy production. In 2019, the hydoelectricity generation peaked at 89 terawatt-hours of electricity, whereas it decreased to 55.7 terawatt-hours in 2021.
When it comes to bioenergy capacity, figures have grown over tenfold since 2008, reaching over 1.6 thousand megawatts as of 2021. In 2020, geothermal cumulative installed capacity amounted to 1.6 gigawatts. Compared to other renewable energy sources, Turkey's geothermal and biomass sources were relatively minor contributors to energy generation.

In the following 6 chapters, you will quickly find the 30 most important statistics relating to "Renewable energy in Turkey".

Statistics on the topic
Electricity generation in Turkey
333.3 TWh
Renewable energy capacity in Turkey
53.2 GW
Number of employees in the hydropower energy sector in Turkey
34,400 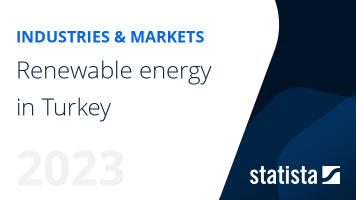 The most important key figures provide you with a compact summary of the topic of "Renewable energy in Turkey" and take you straight to the corresponding statistics.

Renewable energy in the Asia-Pacific region