Published by
Christopher Hughes,
Jan 13, 2021
The Australian 2019/2020 bushfire season was one of the worst in recent times in the world. The season started in early November 2019 in New South Wales, and gradually progressed in Victoria, Western Australia, South Australia, and the Australian Capital Territory. Thousands of firefighters and volunteers battled the fires, with millions of hectares burned, thousands of properties damaged, and countless numbers of wildlife exposed. In February 2020, the last fires were reportedly extinguished, with torrential rain assisting in putting out the remaining fires.
Experts agree that high temperatures and prolonged dry conditions led to wildfire activity on an unprecedented scale. While Australia’s highest temperature recorded in one day was 50.7 degrees Celsius in 1960, 2019 was on average the warmest year on record. These environmental conditions exacerbated the spread of bush fires throughout the country. Smoke haze and particulate matter affected the lives of many in the eastern and southern states. Air pollution reached dangerous levels in NSW in particular, with some areas exceeding levels deemed safe by the Australian Government by over 20 times.

New South Wales was the worst hit state in terms of area burned. Most of the land affected was conservation and forest land. Some sources estimated that at least 80 percent of the Blue Mountains, and 53 percent of the Gondwana world heritage sites were burned. As a result of the massive habitat losses, an estimated 1.5 billion animals were killed as their homes were destroyed. Livestock were also affected to a degree, with thousands of beef cattle in Victoria killed because of the fires. The impact on people was significant. At least 34 people lost their lives. Many Australians were exposed to the bushfires in some way, either directly or indirectly. Thousands of homes as well as commercial buildings were destroyed or partially damaged, and early insurance claims were valued at 1.9 billion Australian dollars in February 2020.

In response to the bushfire damage, financial aid has come from many different sources. As of January 2020, charitable donations collected from across the globe exceeded 500 million Australian dollars. Some charities have been criticized for only allocating a small portion of the donations for immediate relief. In early 2020, the Australian Government announced a two billion (AUD) bush fire relief package, with a large portion of these funds allocated to primary producers.

In the following 5 chapters, you will quickly find the 28 most important statistics relating to "Bushfires in Australia".

The most important key figures provide you with a compact summary of the topic of "Bushfires in Australia" and take you straight to the corresponding statistics. 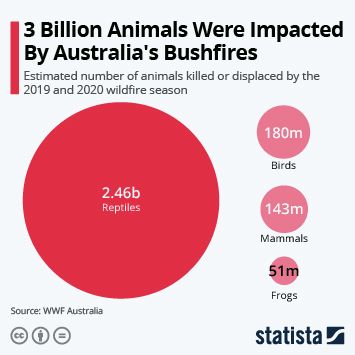 estimated number of animals killed or displaced in Australian bushfires