The Ford brand is one of the highest valued automotive brands in the world, particularly when compared to its American competitors. Valued at around 10.4 billion U.S. dollars, it ranked sixth among the most valuable brands within the automotive sector worldwide in 2021. The namesake brand belongs to Ford Motor Company, which also holds the rights to the Lincoln brand. In the fourth quarter of 2020, the Ford brand represented around 94 percent of the manufacturer’s sales in the United States. However, 2020 sales have dipped in the country, due to the impact of the COVID-19 pandemic on new vehicle demand. Ford Motor Company recorded a loss of around 16 percent of its 2019 light vehicle volume in the U.S, compared to a 15 percent drop in overall light vehicle retail sales in the country that same year.

A company impacted by COVID-19

Founded by Henry Ford in Detroit, 1903, Ford Motor Company was an early pioneer in vehicle manufacturing, particularly line assembly. This established Ford as one of the world’s first mass producers of automobiles. In recent years Ford has experienced some difficulties. This has resulted in a drop in stock price and employee layoffs. In 2020, for the first time since 2008, the company recorded a net loss. At a drop close to 1.3 billion U.S. dollars, this loss was in parts a result of the COVID-19 pandemic which put manufacturing at a standstill and led to a decrease in demand. That same year, most of Ford’s revenue came from its automotive segment, which reached around 115.9 billion U.S. dollars. North America was the main regional market for the brand that same year, representing 69 percent of its total revenues. Between 2017 and 2019, Ford has spent roughly seven billion U.S. dollars on advertising campaigns in the United States alone.

Ford’s place in the U.S. market

With over 1.8 million wholesales in 2020, the United States was the leading market for Ford Motor Company’s vehicles. Among Ford’s model line-up is one of the world’s most popular vehicles: the F-150. The F-series has proven to be consistently one of the most popular light vehicle models in Canada and the United States over several decades. In 2020, it ranked as the best-selling light truck in the U.S., recording over 787,400 sales. U.S. consumer satisfaction with Ford dipped to an index score of 76 that same year, before rising to match the national average at 78 in 2021.
Like many U.S. motor brands, Ford has struggled to establish itself in competitive foreign markets. In the United Kingdom however, several Ford models are among the most popular cars. As a brand, Ford states that it will prepare for the future by shifting its production to be more focused on pickups, which have grown in sales in the United States, as well as SUVs.
This text provides general information. Statista assumes no liability for the information given being complete or correct. Due to varying update cycles, statistics can display more up-to-date data than referenced in the text. 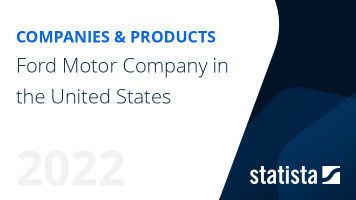 The most important key figures provide you with a compact summary of the topic of "Car brands: Ford " and take you straight to the corresponding statistics.