Published by Statista Research Department, Mar 3, 2022
The government of Thailand operates under a unitary state alongside a democratic system with a constitutional monarchy. Thailand was governed under an absolute monarchy regime until 1932 and was ended by the Siamese Revolution of 1932 which was then replaced with a constitutional monarchy as seen today. The government of Thailand consists of three branches: the executive, the legislative, and the judiciary. In 2020, the Thai government was evaluated with the governance index among other ASEAN countries, coming in sixth after the Philippines.

The current state of government debt

Despite the country’s promising economic conditions, Thailand still struggles with its national debt levels that have been gradually rising over the past years. The recent COVID-19 pandemic has continued to increase the amount of national debt in order to support the stimulus packages and relief measures by increasing the debt ceiling to 70 percent in terms of debt to GDP. When not taking into account the pandemic, the national debt in Thailand was forecast to amount to around 334 billion U.S. dollars by 2026, which would be more than half of the GDP's proportion. In correspondence to the national debt levels, the government of Thailand held a significant value of debt securities as liabilities in 2020, taking up most of the total value of government liabilities. Such government debt securities consisted of treasury bills, bonds, and promissory notes.

In the following 5 chapters, you will quickly find the 26 most important statistics relating to "Government finances in Thailand". 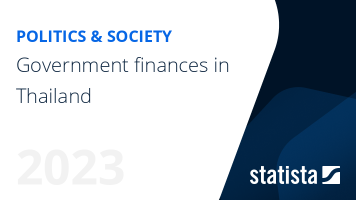 The most important key figures provide you with a compact summary of the topic of "Government finances in Thailand" and take you straight to the corresponding statistics.