With the outbreak of the COVID-19 pandemic and its socio-economic consequences, there has been close to no aspect in people’s daily lives left unchanged. Social distancing has become a norm, and with it the need of alternative ways of connection. In the area of education this has been particularly challenging. Since presential tutoring has been avoided in many parts of the world, teachers and students have been faced with the task of finding ways of enabling distance learning. As a region which already struggled with providing all children with enough resources for an optimal learning environment, in Latin America the situation has come with its own complexities. However, if there is a constant, it is that inequalities are present and circumstances are not the same for everyone, neither within, nor between countries.

Differences on the use and access to online education vary widely in Latin America. The contrast can be observed in multiple areas. While disparities between countries can be expected, distinctions also emerge between educational levels, private and public sector, rural and urban areas, and unsurprisingly, socio-economical levels. Opposing realities can be recognized even in the level of disparities from one nation to another. While there is, for instance, a considerable gap in the share of desktop ownership when considering different quartiles for some Latin American countries, figures vary greatly both between nations, and within the population of a country. However, despite the discrepancies latent in the region, the use of online education tools is present in Latin America, and the number of users of learning apps such as Coursera, edX, or Kahn Academy amount to thousands in some countries.

Online education as a complementary tool during the pandemic

Though the use of online resources has shown to be a valuable alternative amidst the context of the COVID-19 pandemic, governments in Latin America have been faced with the challenge of having to limit face-to-face contact, while at the same time keeping education available in a system where a considerable part of the population has little to no access to internet or e-learning tools. However, given its convenience, online education has been the most chosen learning delivery system within the region during the pandemic, with most countries using a combination of open, commercial, and commercial-free platforms. Despite online learning being one of the most chosen tools, other distance learning tools have been implemented, from broadcasting of educational programs in radio and television, to contact by mobile phone and even offline resources. Overall, the use of online education in the COVID-19 pandemic has both highlighted educational inequalities in the region, and presented itself as a tool with the potential to assist in the demanding task of diminishing them.
This text provides general information. Statista assumes no liability for the information given being complete or correct. Due to varying update cycles, statistics can display more up-to-date data than referenced in the text.
Published by Teresa Romero, Jul 6, 2021

Household internet penetration in Latin America and the Caribbean 2020, by country

Latin America and the Caribbean: mobile internet penetration 2022, by country

Computer penetration in Latin America and the Caribbean 2020, by country 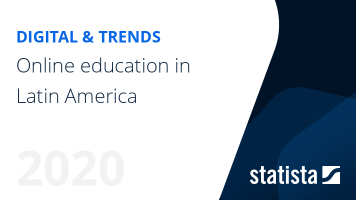 The most important key figures provide you with a compact summary of the topic of "Online education in Latin America " and take you straight to the corresponding statistics.