Published by
Christopher Hughes,
Mar 26, 2021
When considering printed media, we are generally discussing the production, circulation, and sales of printed books, as well as newspapers and magazines. The Australian print media market is, by and large, in decline in the same way that the global market is. This is a direct result of the increasing digitalization of almost all aspects of the media industry.

The newspaper market has proved to be a little hardier than its print counterparts. Globally, the circulation revenue of newspapers remained steady until around 2017 and only experienced a notable reduction the following year. In Australia, most newspapers still enjoy robust reader numbers for their printed editions, although most attract a far wider digital circulation. The increased digital readership in recent years has led a number of publications to incorporate paywalls via their websites and apps as a means of securing a continued revenue stream.

Moreover, more Aussies are turning to other outlets as their main source of news, with over half of respondents to a recent survey saying they used social media and blogs to stay up to date with current affairs. By comparison, just a quarter said they went to printed media before any other sources. It isn’t all bad news though, as over sixty percent said their first stop for news was traditional television news bulletins.

It is a similar story for printed magazines, too. Despite digital readerships increasing year on year, popular publications such as Australian Women’s Weekly and Empire (a film magazine) still recognize reader numbers well into the millions. When it comes to books, the market for both printed and audio-based educational books has dropped a little year on year (by less than half a percent) recently, and this trend is expected to continue well into the 2020s. Despite this, the revenue of printed consumer and educational books is expected to increase slightly into the early 2020s.

In the following 4 chapters, you will quickly find the 18 most important statistics relating to "Print media industry in Australia". 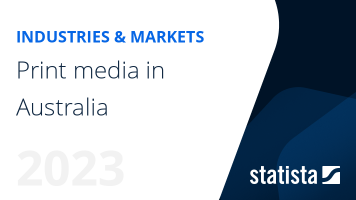 The most important key figures provide you with a compact summary of the topic of "Print media industry in Australia" and take you straight to the corresponding statistics.