Google in the UK - statistics & facts

Published by
Joseph Johnson,
Mar 29, 2021
Alphabet, Google’s parent company is the second largest internet company worldwide, with a market capitalization value of 1.39 trillion U.S. dollars. While the company owns several subsidiaries including the biotechnology brand Calico and research spin-off X Development (formerly Google X), none has been as significant as the Google brand itself. A global household name, Google is the third most valuable brand after Apple and Amazon, and continues to grow its revenue year after year. This is largely due to the success of its main acquisitions - YouTube, Android, Waze and Nest, among others. Figures from the United Kingdom echo the company’s international success. Here, Google UK Limited experienced revenue growth of nearly 200 million British pounds in 2019.

In terms of reach, no other search engine tops Google. Even Microsoft’s Bing and Yahoo! Search, the company’s largest competitors, barely come close to the search giant’s market share which has stood at 80 percent in the UK since 2015. Google also profits largely from its advertising products GoogleAds and AdSense, both of which have boosted the company’s revenue in the search and advertising sector. With growth in the UK expected until at least 2024 for both mobile and desktop advertising, Google’s success is likely to continue. To top this off, monetization through YouTube ads, one of Google’s most successful acquisitions, has further contributed to the brand’s income - and this despite most internet users in the UK claiming to have a negative perception of video ads.

While Google has become synonymous with internet search, the company has also been highly criticized for collecting user data (ranging from personal location to search history) in order to optimize ads and search results. In reaction to this, alternative search engines such as DuckDuckGo and Ecosia have seen a recent surge in uptake. The latter, for instance, hit its second highest market share in the UK in January 2021, albeit being significantly more popular in Germany and France. A 2019 survey, however, highlights the reason why users might still be hesitant to switch search engines despite privacy concerns. Internet users surveyed said that the quality of results was the most important factor for them when it came to selecting a search engine, while data protection came in second. With many having to turn to the internet for necessities during the coronavirus (COVID-19) lockdown, Google’s search volume was higher in the first four months of 2020 compared to the year before. This was most significant in the categories ‘home and garden’ and ‘things to do at home’.

In the following 6 chapters, you will quickly find the 36 most important statistics relating to "Google in the UK".

The most important key figures provide you with a compact summary of the topic of "Google in the UK" and take you straight to the corresponding statistics.

Search trends in the UK

Search advertising in the U.S. 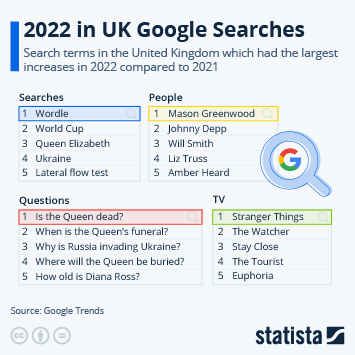 Joseph Johnson
Research expert covering internet use, cybercrime, digital privacy, and online search
Get in touch with us now