Environmental protection and climate change have become the biggest drivers for technology development, and the need for sustainable solutions continues to increase. Environmental technology (envirotech), also referred to as green technology (greentech), or clean technology (cleantech), combines the fields of science, environment, technology, and economics. Important factors are the focus on sustainable development as well as the goal to minimize the negative impacts of humans on the environment. Key markets are renewable energies, energy efficiency, sustainable mobility, as well as sustainable waste, and water management.
Japan intends to reduce its greenhouse gas emissions by 46 percent until 2030 and additionally aims to become carbon-neutral by 2050. To realize these climate goals, it is necessary for the country to further increase its use of renewable energy technologies and other energy-efficient solutions. The development of environmental technologies, as well as their integration into daily life, is crucial. In recent years, figures for environmental research expenses indicated an increase, as the field is gaining importance.

The term greentech is often used to refer to sustainable energy generation technologies. Japan is currently working on replacing fossil fuels with low-carbon energies such as nuclear energy and renewables. The country steadily expanded its electricity production from renewables, increasing the share to close to 20 percent. Solar power and hydropower represent the largest renewable energy sources. A further increase in hydropower capacity is hardly possible since the potential is almost fully developed. Therefore, Japan currently focuses its investments in solar and wind power. Since the mountainous island nation has limited land area, these markets will center on floating solar panels as well as offshore wind farms with floating turbines.

Other major environmental technologies in Japan

Zero energy houses combine energy efficiency and renewable energy generation to consume only as much energy as can be produced with renewable resources onsite, usually solar panels or wind energy. They have insulation that keeps the temperature inside the house stable, which helps to reduce the need for heating or cooling and thus lowers the overall energy demand. In recent years, the number of newly built zero energy houses in Japan increased steadily, and the number of smart homes including the segment of energy management was forecast to increase as well. The latter include systems that monitor and control home attributes such as lighting and temperature, which can be used for energy-saving measures. Similarly, energy management systems are computer-aided systems, which monitor and control the energy flows in a power supply network and achieve energy efficiency through process optimization. They can be used in a broader context in smart cities as well as on a smaller scale in individual homes.
Furthermore, the market for eco-friendly vehicles continues to grow as environmental regulations on the automobile industry are strengthened. Japan remained one of the global leader in car producers, but it lags behind in the production of electric vehicles. Even though the Japanese government made efforts to promote next-generation vehicles and improve their infrastructure, new electric vehicle sales decreased in recent years.
This text provides general information. Statista assumes no liability for the information given being complete or correct. Due to varying update cycles, statistics can display more up-to-date data than referenced in the text. 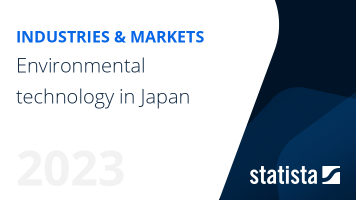 The most important key figures provide you with a compact summary of the topic of "Environmental technology in Japan" and take you straight to the corresponding statistics.