Hunting refers to the practice of capturing or killing wild animals, mainly for the purposes of meat consumption or recreation. Sometimes hunting is also used to manage feral or invasive wildlife populations. In France, hunting is not legal everywhere. Often it is the case that hunting is only allowed in special locations with a valid permit. In total, there are 22 hunting and wildlife reserves in France where hunting is allowed. Additionally, firearms used by hunters are heavily regulated to prevent misuse and injury. In 2019, there were over one million hunters with firearms in France, who collectively owned over two million weapons.

In France, the number of valid hunting licenses has declined in recent years, reaching an all-time low in 2020, with just over one thousand active French hunting licenses. That being said, according to a survey done in France in 2021, nearly 40 percent of French citizens stated that they knew at least one hunter among their close friends and family.

The types of animals that hunters target varies by region, depending on native or invasive wildlife species in the area. In Europe, wild boars, in particular, have become a nuisance in many urban areas, and the animals are popular targets for hunters in efforts to reduce their population. The number of wild boar killed each year in France has steadily increased, and there were over 800 thousand killed in the 2019 hunting season alone. Though public opinion on hunting varies, most French citizens feel that hunters are essential to limiting the growth of the wild boar population.

With the use of firearms and other deadly weapons comes the risk of injury or even fatal accidents, for both hunters and civilians. The number of hunting accidents in France declined over the last two decades, however, there were still over 130 accidents in 2020. Hunters make up a majority of the victims in most French hunting accidents, but civilians are also sometimes injured or killed. This can impact the public's feeling of safety when out in nature during the hunting season. According to a 2021 survey, the majority of respondents, over 70 percent, did not feel safe being out in nature during the hunting season in France, an increase compared to results from a decade earlier.
This text provides general information. Statista assumes no liability for the information given being complete or correct. Due to varying update cycles, statistics can display more up-to-date data than referenced in the text.
Published by Statista Research Department, Jan 7, 2022

Renewal fee for an annual hunting license in France
45.22 EUR

Price of the hunting license in France in 2021, by type

Price of the hunting license in France in 2021, by type 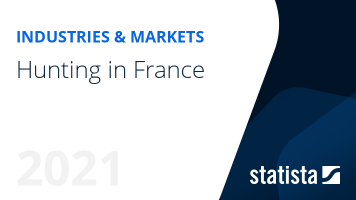 The most important key figures provide you with a compact summary of the topic of "Hunting in France" and take you straight to the corresponding statistics.