In 2022, advertisers were expected to spend 8.4 billion euros in ad campaigns in Italy, marking a slight increase from the previous year, which had seen spending bounce back from its COVID-19-related woes. The share of digital in the ad spend of Europe’s fourth largest economy increased in 2022, two years after it overtook television as the country’s main advertising medium. Given Italy’s love for all things food, it comes as no surprise that the latter was the industry with the highest advertising spending; however, Italy’s largest advertising spender was auto giant Volkswagen.
Traditional media

Digital’s rise all the same, television remains one of the most popular and widespread media in Italy, with a growing ad spend to boot. Publitalia ’80 – the advertising agency of mass media behemoth Mediaset - was the country’s top TV sales house, accounting for more than half of national television advertising spending. Radio and cinema ad spending made timid gains in 2021, following the previous year's slump. Outdoor ad spending was projected to return to pre-pandemic levels in 2022, before flatlining over the following three years. Newspaper advertising’s already existing downward slope was accelerated by the COVID-19 pandemic and was projected to continue in a steady fashion over the following years. A yearly decrease in print newspaper ad spending was accompanied by an equivalent gradual increase in digital newspaper ad spending.

After years of being hot on the heels of television advertising, digital managed to surpass it in 2020 and is now moving towards securing at least half of the country’s whole advertising pie. As far as devices are concerned, mobile internet was expected to surpass desktop internet’s ad spending share in 2023. Mobile-savvy Italy was among the largest social media advertisers in Europe, after the United Kingdom, Germany, and France.

The country’s level of trust in general media has been hovering under 50 percent throughout the last decade, with almost one third of Italians considering the country’s main TV channels to be a reliable source of information – more so than any other source. In a survey about online advertising carried out in 2021 and 2022, almost half of the respondents stated that they were often annoyed by advertising on the internet. Almost one third of Italian respondents said they trusted social media advertising, while consumers aged between 18 and 24 were found to be those most prone to making a purchase following a product placement on social media.
This text provides general information. Statista assumes no liability for the information given being complete or correct. Due to varying update cycles, statistics can display more up-to-date data than referenced in the text.
Published by Statista Research Department, Nov 14, 2022 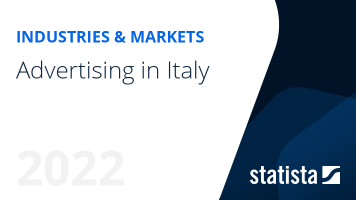 The most important key figures provide you with a compact summary of the topic of "Advertising in Italy " and take you straight to the corresponding statistics.