40k
57k
41k
9.6k
For years, the migration crisis has divided Europe, empowering a populist tidal wave across the continent. According to Eurostat, the number of first time asylum applications in 2017 was 650,000 - substantially lower than in 2016 (1.2 million) and 2015 (1.26 million). Tensions are still high despite that decline, though interestingly, a new Pew Research survey has found taking in refugees is not the key issue. In fact, most countries have a major problem with how the EU is handling the crisis.

Pew found that sizeable majorities in Spain, Germany, France and Sweden all support taking in people fleeing violence and war. Even in the UK where Brexit has caused enormous uncertainty and the subject of migration provokes bitter debates, 74 percent of those polled said they favor taking in refugees. In Europe, Hungary is an exception to the supportive trend with 54 percent saying they oppose taking in refugees. In an unprecedented move last week, the European Parliament backed sanctions against Hungary and its right-wing Orban-led government, accusing it of corruption and human rights violations.

While support for taking in refugees is strong in most EU countries, Pew found that there is widespread disapproval of how the EU is handling the situation. 92 percent of respondents in Greece, 84 percent in Sweden and 80 percent in Hungary all believe the EU is mishandling the crisis. Even in countries where support for taking in refugees is highest, criticism of the EU remains strong. In Germany and France, the share of dissaproval is 66 percent and 74 percent respectively.

Elsewhere in the world, the picture is more mixed when it comes to helping refugees. While opposition is very strong to taking in refugees in South Africa (50 percent) and Russia (47 percent), it is lower in Australia, Japan and the United States. Looking at the latter, 66 percent of people support taking in refugees while 29 percent are opposed. 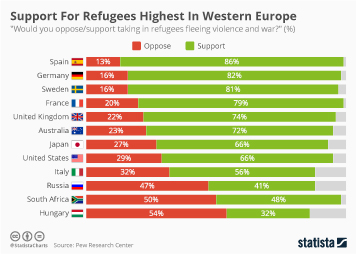 This chart shows responses to the question: "would you oppose/support taking in refugees fleeing violence and war?"