53k
74.6k
87k
88.9k
Australia requires new laws and regulations to rein in the power of Google and Facebook, according to the Australian Competition and Consumer Commission’s (ACCC) Preliminary Report on the Digital Platforms Inquiry.

According to the ACCC, 94 percent of online searches in Australia are performed through Google, giving the company power in the online advertising market, and Facebook and Instagram combined account for 46 percent of Australian display advertising revenue. No other competitor accounts for more than five percent. ACCC estimates indicate that for a typical $100 digital advertising spend (excluding classifieds) $47 goes to Google, $21 goes to Facebook, $32 goes to all other websites.

Citing concerns caused by this concentration of power, such as the threat to Australian news and journalism and the privacy of users, the ACCC outline 11 key recommendations. These include modifying merger and acquisition laws, preventing the practice of pre-installing default browsers on mobile devices, making unfair contract terms illegal, and amending the Privacy Act 1988 to improve the management of personal data.

Beyond the recommendations the ACCC outlines nine areas for further analysis and assessment, and will be accepting submissions prior to handing down a final report on 3 June 2019. 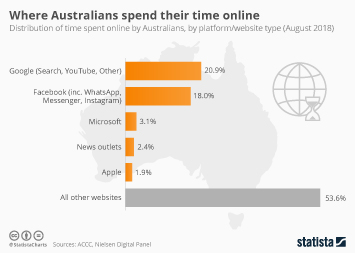 This charts shows a distribution of time spent online by Australians, by platform/website type in August 2018.