While Trump has many real estate assets and companies listed under his name, few are raking in big bucks. Two notable exceptions are the two Trump International Hotels in Las Vegas and D.C., which brought in US$28.6 million and US$40.8 million respectively. The D.C. location is the subject of lawsuits, accusing Trump of emolument by having foreign governments lodge and spend money at his hotel.

Overall, Trump’s golf courses are more successful. The 2018 filing listed 16 different courses, ten bringing in over US$10 million. The most successful was Doral golf course near Miami, Fla., at US$76 million, followed by Turnberry golf course in Scotland and the infamous Mar-A-Lago resort in Palm Beach, Fla., which has become a presidential residence as well as a presidential moneymaker.

While the chart displays only income sources of US$1 million and more, roughly another million is added by smaller business incomes, interest on several bank accounts and two artist pensions from the Screen Actors Guild and the American Federation of Television and Radio, totaling around US$100,000. Trump is donating his annual presidential salary of US$400,000. 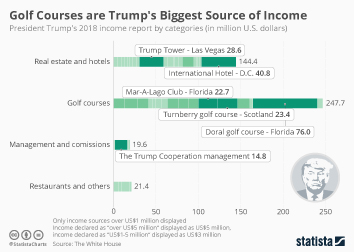 This chart shows the 2018 income of U.S. President Trump by categories.