Faced with one of the largest antitrust lawsuits in history, Facebook has ramped up its lobbying expenditure in 2020. According to official filings with the Senate Office of Public Records, the social media giant spent $19.7 million to make its voice heard in Washington D.C. last year, up 18 percent from its 2019 total. According to an analysis by the Wall Street Journal, that makes Facebook the biggest corporate lobbying spender in the United States, ahead of fellow tech giant Amazon and telecom conglomerate Comcast.

“We’ve been clear that the internet needs updated regulations, which is why we’ll continue voicing our support for new rules that address today’s realities online,” a Facebook spokesman said to the Wall Street Journal in a statement many people would agree with. However, Facebook probably has different regulations in mind than the Federal Trade Commission, which, along with 48 state attorney generals, had sued Facebook in December 2020 for “illegally maintaining its personal social networking monopoly through a years-long course of anticompetitive conduct.”

In recent years, calls for regulation of “big tech” have gotten louder, with proponents of government action arguing that companies such as Facebook have become too powerful and need to be scrutinized and possibly reined in by the government. To prevent such a thing from happening and make their case on Capitol Hill, tech companies have ramped up their lobbying spending significantly over the past decade. As the following chart, based on official disclosures, shows, Google, Amazon, Facebook and Apple spent a combined total of $51.7 million on D.C. lobbying over the past twelve months, up 29 percent from 2015 and nearly 500 percent compared to 2010.

Interestingly, both Apple and Google reduced their lobbying expenditure in 2020 compared to the previous year despite being under intense scrutiny themselves. While Apple has come under fire for its allegedly anticompetitive app store rules, Google faces an antitrust suit for "unlawfully maintaining monopolies in the search and search advertising markets". 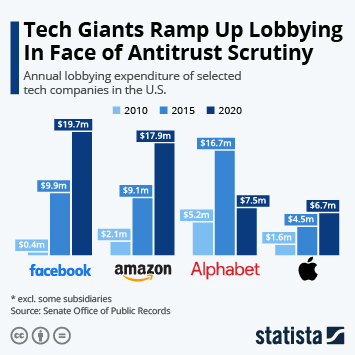 This chart shows annual lobbying expenditure by major tech companies in the U.S.