The kidney is the organ most often transplanted in the U.S., and the number of transplants has more than doubled since the late 1980s. Kidneys, as well as livers, are donated by both deceased and living patients, which is why transplant numbers for these organs are higher than those for hearts and lungs.

In the case of kidneys, transplant numbers started rising more quickly in 2010 – a clear connection to the ongoing opioid crisis in the U.S. In a bittersweet twist of events, younger and healthier organ donors dying from overdoses increased the size of the donor pool significantly, since deceased donors can donate both, not just one, of their kidneys.

Few other organs that are not kidneys, livers, hearts and lungs are transplanted at all. The next most common transplant is the pancreas, which was transplanted several hundred times a year in the 2000s and 2010s, though numbers have decreased recently. This happened in connection to falling numbers of diabetes type 1 opposite to type 2, the latter typically not being the right type of patient for a pancreas transplant. Other organs transplanted in the U.S. between 1988 and 2019 include upper limbs, intestines, abdominal walls, faces, scalps, penises and uteruses, according to the U.S. Department of Health and Human Services. 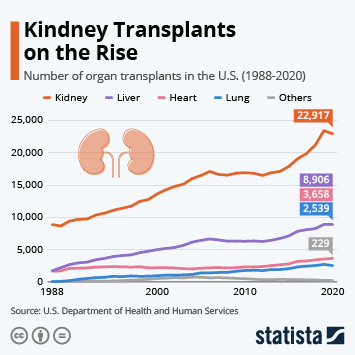 This chart shows the number of organ transplants by type in the U.S. between 1988 and 2020.