With the COVID-19 situation showing signs of improvement and another stimulus package on its way, there's finally some reason for optimism with respect to the U.S. economy. As it stands, however, the impact of the pandemic is still clearly visible, especially in the labor market.

According to the latest jobs report, published by the Bureau of Labor Statistics, job gains in the United States slowed to a trickle in January, as gains in professional and business services and education were partly offset by losses in leisure and hospitality, retail trade, health care and in transportation and warehousing.

Meanwhile, the level of long-term unemployment continued to rise, approaching levels last seen in the aftermath of the financial crisis. According to the BLS, more than 4 million Americans have been unemployed for 27 weeks or longer, indicating just how difficult it’s been for those who lost their job in the spring to find work again. As the following chart shows, almost 4 in 10 jobless persons in the U.S. have now been unemployed for at least 27 weeks, up from a pre-pandemic average of around 20 percent.

These numbers are especially significant these days, as Congress is expected to move quickly on a $1.9 trillion stimulus package, which would extend emergency unemployment programs, including a $400 weekly supplement to regular unemployment benefits, beyond March. 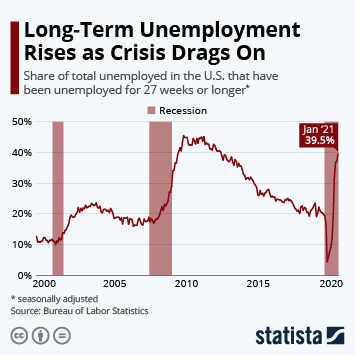 This chart shows the share of total unemployed in the U.S. that have been unemployed for 27 weeks or longer.