One of the most significant shockwaves to be felt outside of Ukraine since the Russian invasion isn't in Europe, but in Africa. As this infographic using Trade Map data shows, the continent's biggest sources of wheat are Russia, France and Ukraine. African economic intelligence firm Concerto estimates that Russian and Ukrainian imports account for 30 percent of all African wheat consumption. In the case of Egypt, for example, this figure is closer to 80 percent.

Speaking to Arab News at the end of February, Nader Saad, an Egyptian government spokesman said that the country has a stockpile which will supply the population with wheat for nine months, adding: “Egypt is working on a plan to import wheat from other sources instead of Russia and Ukraine, as Egypt has 14 countries approved for the supply of wheat, some of which are outside Europe”.

As Africa, and the world, prepares to deal with a significant fall in wheat supplies, prices are already rising significantly, further adding to the looming African crisis. The UN's price tracker, the FAO Food Price Index, reached a record high in February, with increases to wheat, dairy and vegetable oils driving the rise.

Kenya is another country for which a large proportion of wheat supplies come from Ukraine and Russia. As reported by Der Spiegel, Paloma Fernandes of the Cereal Millers Association in Kenya warned at the start of March: "The wheat prices have already exploded here, and millers have very little access to capital". Market vendor Beatrice Atieno summed up the current situation: "Sometimes, we go to bed hungry because life has become so expensive...Bread, especially, is something I can no longer afford to buy. We eat potatoes for breakfast instead." 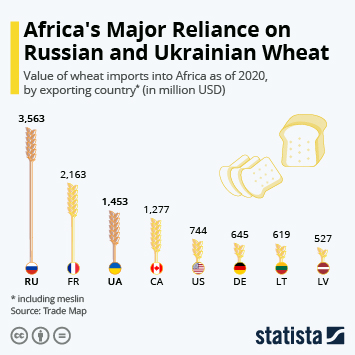 This chart shows the value of wheat imports into Africa in 2020, by exporting country.