The U.S. dollar is getting stronger compared to the world's major currencies. So far in 2022, the value of the dollar has hit levels not seen since the early 2000s, almost reaching parity with the euro and growing strong even against the Japanese yen, one of the most stable currencies of recent decades. The dollar has also gained ground against the pound sterling – almost to the same extent as against the euro – and to a lesser extent against the Chinese yuan.

But what’s caused this change? Two reasons: firstly, inflation triggered by the pandemic, and secondly, the United States’ monetary authorities’ attempts to stop hikes through pushing up interest rates. The U.S. Federal Reserve’s increased base interest rates have in turn helped attract investors to the dollar by offering higher credit returns. And in addition to that, the fear of a gas crisis in Europe - if Russia does choose to cut off supply - has further alienated buyers from the euro, a trend that the European Central Bank is also trying to counteract by also raising interest rates.

As our chart shows, the dollar saw its steepest rise from March onwards, shortly after the Federal Reserve approved the first hike in its target interest rate in more than three years. However, the strengthening of the value of the dollar was already around 5 percent against the euro, the yen and the pound sterling in November 2021, when inflation forecasts foreshadowed an upcoming hike in interest rates and investors began to bet more on the dollar. 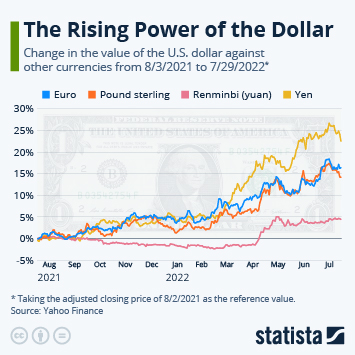