The Southern Poverty Law Center, a prominent civil rights group, has released its annual census documenting American hate groups. Even though 2020 proved one of the most politically divisive years in U.S. history with conspiracy theories and white nationalist ideology getting closer to the mainstream, the number of active hate groups across the country actually declined. The SPLC identified 838 active hate groups in 2020, a lower figure than the 940 groups documented in 2019 as well as lower than the record-high of 1,020 operating in 2018.

Even though the number of hate groups is trending downwards, that does not necessarily mean that extremist activity and the threat from domestic terrorism are also diminishing. The SPLC has carried out this analysis every year since the 1990s and while it does serve as a barometer for extremism, it is by no means the only one. The internet and social media in particular have altered the hate speech landscape significantly with much of the racism and bigotry moving online. The SPLC states that "the proliferation of internet platforms that cater to extremists allows individuals to engage with potentially violent movements like QAnon and Boogaloo without being card-carrying members of a particular group".

While internet forums, chat rooms and encrypted apps have become attractive venues for hate speech, they wrere not the only reason for the decline of physical hate groups. The Covid-19 pandemic has also played a role with some groups ceasing in-person activity. Bans on major social media networks have also brought an end to some hate groups. The research had some recommendations for Biden's administration such as the establishment of new offices within the Department of Homeland Security, Justice Department and FBI to monitor and prosecute cases of domestic terrorism. It also urged improvements in the collection of federal hate crime data, training and prevention.

The findings come nearly a month after a mob of Trump supporters and members of far-right groups stormed the Capitol, an event linked to five deaths. Referring to what happened on January 06, Susan Corke, director of the SPLC’s Intelligence Project, said that "it was the culmination of years of right-wing radicalization. Most recently, it was the product of Donald Trump’s support for and encouragement of radicalized individuals and groups to buy into conspiracy theories about a ‘stolen election'". She continued by stating that “Trump may no longer be in the White House, but the white nationalist and extremist movement he emboldened and incited to violence is not going anywhere – and may grow more dangerous to our country." 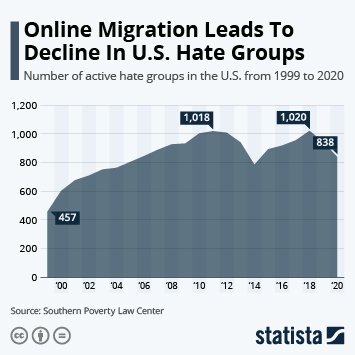