When people think of Apple, they think of hardware first. iPhone, iPad, MacBook and iMac – those are the products that made Apple what it is today: the most valuable company in the world. Despite having always emphasized the advantages of its hardware and software working seamlessly together, the latter was long considered a means to an end at Apple, rather than a worthwhile business opportunity in itself. Over the past few years, however, that perception changed to some extent, as software and services have come to play a larger role than ever in Apple’s business.

In 2020, Apple doubled down on its services ambitions by announcing Fitness+, a Peloton-like subscription service for online fitness classes, and Apple One, which bundles Apple's subscription services into different packages ranging from $14.95 to $29.95 a month. With Apple TV+, Apple Music, Apple Arcade, as well as iCloud and Apple Care, Apple’s services and subscription business has become a beast of its own in recent years. According to its latest earnings report, the company now has 825 million paid subscriptions across all of its services, up 165 million from a year ago. As our chart illustrates, Apple's services revenue increased more than five-fold since 2013, growing from $14.5 billion in the twelve months ended March 2013 to $75.1 billion in the twelve months ended March 2022.

While still amounting to less than 20 percent of Apple's total sales, $75 billion in annual revenue is beyond most companies’ wildest dreams. Looking at Fortune's Global 500 list, Apple's services would have been the 115th largest company in the world last year in terms of revenue, beating household names such as IBM, Pepsi and Disney. 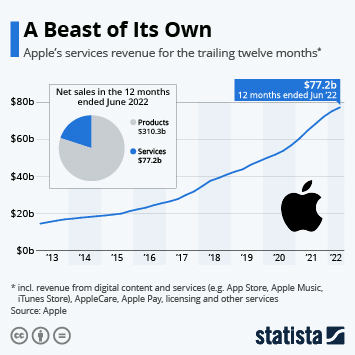 This chart shows Apple's services revenue on a trailing-twelve-months basis.