Published by Statista Research Department, Apr 29, 2019
Kindergarten is a preschool educational approach traditionally based on playing, singing, practical activities such as drawing, and social interaction as part of the transition from home to school. The first such institutions were created in the late 18th century to serve children whose parents both worked out of the home. As of 2015, about 3.64 million children were enrolled in public kindergartens in the United States, and another 428,000 in private ones.
A lot of families struggle to afford quality child care. With child care costs for an infant in a center amounting to about 16 percent of the median income in Colorado and for a school-aged child to 12 percent in the state of New York in 2015, parents are faced with great economic struggles. Child care has generally become less affordable for the majority of families living in the United States; however, for many low-wage workers child care is out of reach. In 2014, about 65 percent of children under 5 years had child care arrangements outside center-based care.

In the following 5 chapters, you will quickly find the {amountStatistics} most important statistics relating to "Kindergarten and Child Care".

The most important key figures provide you with a compact summary of the topic of "Kindergarten and Child Care" and take you straight to the corresponding statistics. 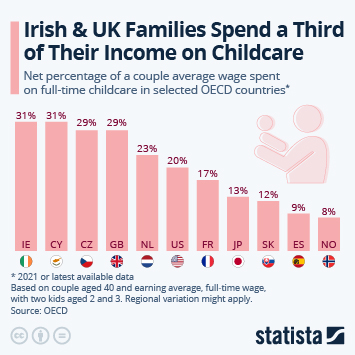 UK Families Spend A Third Of Their Income On Childcare