Social media is a driving force of internet usage in the United States. As of January 2019, North America had a mobile social media penetration rate of 61 percent, ranking second after East Asia which ranked first with 70 percent mobile social media usage reach. When it comes to device preference, it was found that the mobile-first trend has also spread in the United States. Memories of a time in which online gaming and chatting with friends on social media could only be done via a desktop computer are fading, as users instead turn to phones and tablets for messaging, entertainment and even for making transactions. In 2019, mobile accounted for 79 percent of social media site visits in the United States.
Even on mobile, Facebook remains to be a strong ruler of digital landscape with 72.4 percent U.S. smartphone audience reach. The social network is also the most popular mobile social networking app in the United States with almost 169 million monthly active users, followed by Instagram with 121 million monthly active users. Facebook also had the most engaged mobile audience, with app users spending an average of almost 798 minutes per month on the platform. In June 2019, the Facebook Messenger was ranked first in the social networking category with approximately 1.53 million downloads by iPhone users in the United States.

As mobile social media becomes more accessible to younger users than ever before, the market shows no signs of shrinking in the future, in fact Snapchat is predicted to have two million users aged 11 or under in the United States by 2021. In 2023, Instagram is projected to reach 125.5 million monthly active users in the United States, up from 100.5 million users in 2018. The most recent data shows that the leading reason teenagers feel that social media has a positive effect on people their own age is because it allows them to connect with friends and family, and if future generations feel the same, mobile social media usage is likely to have a positive impact on how younger people network, keep in touch and make connections.
This text provides general information. Statista assumes no liability for the information given being complete or correct. Due to varying update cycles, statistics can display more up-to-date data than referenced in the text.
Published by S. Dixon, Feb 8, 2022

Media usage in an online minute 2022

Mobile audience reach of TikTok in the U.S.
35%

Market reach of mobile social apps in the United States
89.5%

Leading app categories in the United States Q3 2020, by reach 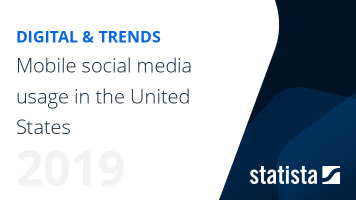 The most important key figures provide you with a compact summary of the topic of "Mobile social media usage in the United States" and take you straight to the corresponding statistics.