With more than 76 percent of Brazil’s population having access to social media, the popularity of these platforms in Brazil could seem like a golden opportunity on a lush market. However, the social and political turmoil of the country brings tensions to aspiring platforms. Social networks and messengers, which are used extensively by all political candidates in Brazil, are popular channels for political campaigns but are also rife with political disinformation.

With the first round set for October 2nd and a second round scheduled for October 30th, the general elections in Brazil are already one of the tensest and most decisive events in the country’s history since its re-democratization. There are two major candidates in the 2022 ballots: former president Luiz Inácio Lula da Silva (known as Lula) from the Workers Party (PT), who ruled the country from 2003 to 2011 and is attempting his third mandate, as well as incumbent president Jair Messias Bolsonaro, now affiliated to the Liberal Party (PL), who was elected in 2018. Polls from August 2022 put Lula ahead of Bolsonaro.

In between, social networks struggle with one of the biggest and most challenging markets in the region. Around 78 percent of Brazilians use social media to talk about politics, especially for sharing political content they found interesting or interacting with like-minded content on their political beliefs. Around 34 percent of Brazilians trust social media as a source for online news, while YouTube is the most popular channel for news consumption in the country and is trusted by more than half of the respondents. But is again Meta’s overall hegemony in the country via Facebook and WhatsApp that pushes the political discussions of the country towards its gravitational field.

Meta’s dominance of the social media landscape also translates into social impact: all its platforms have reflected the political leanings of social media and messenger app users in the country. Nonetheless, Facebook and Instagram are the most used social networks by political candidates themselves for promoting their online campaigns and by most of the electors for political information. But despite the reach and popularity of Meta-owned platforms in Brazil, consumers are familiar with the problems that go hand in hand with their usage.

For example, being the country’s social media sweetheart and the second most-used social media for news consumption in Brazil, WhatsApp remains the biggest platform for personal communication in Brazil. However, as of December 2021, only eight percent of Brazilians care to use the messaging app for political information, as 62 percent of Brazilians claimed the messenger was a place where they had encountered fake news. Meanwhile, watchdog groups are concerned that Meta is not doing enough to counter the disinformation and fake news campaigns, repeating past mistakes from the past elections and similar events in other countries.

The impact of WhatsApp on the country’s politics was already ground for cooperation between the Brazilian Supreme Electoral Court and the app for the municipal elections in 2020, which will also be replicated for this year’s ballots. Other apps are also under institutional observation. Meanwhile, privacy-focused messaging platform Telegram has grown in popularity, becoming the direct competitor in the messaging market. A May 2022 survey found that almost a third of Telegram users in Brazil self-reported leaning toward right-wing ideologies. Currently, the biggest Telegram channel in Brazil is owned by current president Jair Bolsonaro.

The country's polarized environment made several social media users avoid conflict on the platforms, especially among Lula voters. As these are not enough problems, more than half of respondents of a March 2022 survey in Brazil said that messaging apps should be suspended if they disobey a court order to avoid the spread of fake news, while around 81 percent of them agreed that social media platforms and messaging apps should remove fake news content.
This text provides general information. Statista assumes no liability for the information given being complete or correct. Due to varying update cycles, statistics can display more up-to-date data than referenced in the text.

Tiago Bianchi
Research expert covering internet & gaming in Latin America and Spain
Get in touch with us now
Published by Tiago Bianchi, Jan 13, 2023

Brazilian population with high or average interest in politics
53%

Brazil: social media users who discuss politics in the platforms 2021 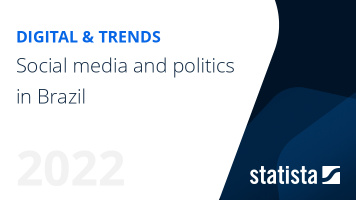 The most important key figures provide you with a compact summary of the topic of "Social media and politics in Brazil" and take you straight to the corresponding statistics.