Cancer forms when abnormal cells grow and divide in an uncontrolled way. This normally starts due to gene changes in a single cell or a group of cells, which are known as mutations. There have to be multiple mutations before a normal cell turns into a cancer cell. Cancers are grouped according to the type of cell they start in. They include carcinomas, sarcomas, leukemia, lymphoma and myeloma, and brain and spinal cord cancers.

A lot of cancer cases are due to environmental factors such as unsafe sun exposure, smoking, an inactive lifestyle, alcohol use and being overweight. However, genetics may also be responsible, with some gene mutations being inherited. Unfortunately, the incidence rate of cancer in the United Kingdom has risen by almost 60 percent since 1995 and the number of people living with cancer is expected to more than double by 2030. Age doesn’t necessarily influence who can get cancer, although the majority of cases occur among individuals aged over 50 years. Certain cancers are naturally gender specific, such as prostate cancer and cervical cancer. However, other cancers do not discriminate based on gender.

Many forms of cancer, depending on the severity, can be treated with surgery followed by chemotherapy, radiotherapy and in some cases, hormone therapy. According to a survey conducted by the National Health Service (NHS), the majority of individuals saw their general practitioner once or twice before being sent to a cancer specialist for further assessment. Respondents said they were given a choice of different types of cancer treatment, with the possible side effects explained in an understandable way. The NHS offers three types of cancer screening to adults in the United Kingdom, these are cervical screening which is offered to women aged between 25 and 64 years, breast cancer screening for women aged between 50 and 70 years and bowel cancer screening offered to individuals over 50 years old, or those with a predisposition or family history. Cancer screenings have proven an effective way of checking individuals for any abnormalities or tumor growths, and have thus attributed to more individuals being successfully treated for cancer in the early stages of disease diagnosis.
This text provides general information. Statista assumes no liability for the information given being complete or correct. Due to varying update cycles, statistics can display more up-to-date data than referenced in the text.
Published by Statista Research Department, Mar 18, 2021

Share of people who have known a family member affected by cancer in Great Britain
53.3% 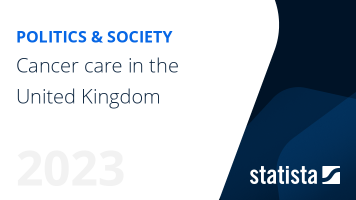 The most important key figures provide you with a compact summary of the topic of "Cancer care in the United Kingdom" and take you straight to the corresponding statistics.